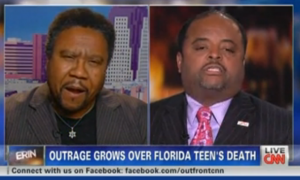 On her show Tuesday night, Erin Burnett spoke to Rev. CL Bryant (former NAACP president) and CNN analyst Roland Martin about Bryant’s criticism of Rev. Al Sharpton and Rev. Jesse Jackson — and their involvement in the Trayvon Martin case. Martin told Bryant to let him know when he goes to Chicago to address black-on-black violence, instead of just criticizing others. Accepting the challenge, Bryant said, “I throw down the gauntlet tonight.”

Burnett began by asking Bryant what he meant when he said Sharpton and Rev. Jackson are “exploiting the tragedy.”

Whenever there’s something like this that occurs, Bryant said, “two faces will show up in order to heighten the tension.” Those faces are usually Sharpton and Jackson, he noted. “Our hearts to go out to this mother,” he said. “And I do believe justice will find its remedy.”

Martin quipped, “Two million people have signed the Change.org petition, and so, Rev. Bryant is taking issue with those two folks? […] Were they the only people who were there?”

“Let’s have the same type of energy toward the young lady, the little girl, who was killed on her doorsteps in Chicago, who was six years old. Let’s gather two million people and talk about the black-on-black crime that is going on. The most dangerous person in the lives of a young black man is another young black man. […] There is not an epidemic of white men killing black boys. There’s an epidemic of black men, black boys, killing black men. And all of them know that. And so let’s focus the energy on solvin the problem that happens every day, not something that happens once in a while.”

Martin argued that Bryant’s made no comment on the Chicago killings nor the Trayvon Martin case, other than his criticism of Sharpton and Jackson. “So, I say, as a pastor, where are you?,” he asked.

“I’ve paid my dues,” Bryant said. “Your question is, what dues have I paid. I’ve had the Klan and the skinheads after me.” Martin said, “That’s not what I asked.”

Burnett then asked Martin about some homicide statistics. Among homicide victims, 53% were black and 93% were killed by their own race. She asked, “Shouldn’t we be doing something about that too?”

Martin replied, “There are people doing that. […] All I’m saying is, he hasn’t said a word about the shootings in Chicago until he criticized Sharpton and Jackson.” A number of pastors in Chicago would love to hear from Bryant, he said, “so don’t just sit here and waste time.”

Let me go on record tonight […] We can meet in Chicago, we meet in Newark, and let’s see whose ideology best suits the traditional core values of black American people. Let’s see whose ideas stand the mustard. I do accept whatever challenge you have, but I throw down the gauntlet tonight.

“You show up,” Martin said.