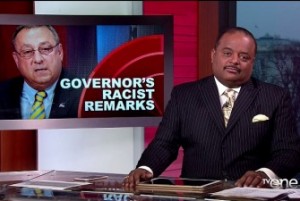 Maine Governor and Chris Christie endorser Paul LePage stepped in it Wednesday when he expelled a statement that was racist even by Trump-era standards. LePage thought he had sufficiently encoded the racism by using names like D-Money, Smoothie, and Shifty to denote the scary drug-dealing out-of-towners without actually saying “nigras,” but blew it on the dismount when he specified that these characters like to “impregnate a young, white girl” on their way back to the ghetto.

On Friday morning’s News One Now, anchor Roland Martin replayed LePage’s remarks for panelists Andrew Lee, Angela Peoples, and Dr. Cleo Manago, and while Dr. Manago gets the runner-up spot for his suggestion that Martin start up a “When White Folks Freestyle” segment, it was Roland’s wordless slow burn that took top prize. Later in the clip, though, he made a devastating point about this year’s election:

“Just deal with the fact that you got some white folks in your state with heroin problems. Here’s what still gets me, I’m looking at all these people who were just trashing crack mothers and black folks taking crack in the 80s, 90s, 2000s, present day. But all of a sudden, now we got white kids dropping left and right in Mew Hampshire and Maine and Vermont because of heroin, now it’s ‘We should really be compassionate.'”

Roland’s insight gets at a couple of different disturbing truths about our politics, the first being the degree to which a politician’s compassion extends beyond his front door. For example, Chris Christie is getting all kinds of credit for his compassionate talk about drug addiction, but he’s flat-out telling voters that he only came to care about this issue because it destroyed his rich white friend’s life. He’s still campaigning against black people, and for “aggressive policing.”

Particularly with Republicans, if your situation doesn’t directly enter some rich, powerful white man’s field of vision, you are out of luck, and if you’re gay, you might still be out of luck. If you’re a woman, forget about it.

But when it comes to policies that disproportionately affect black people, even Democrats have spent decades mining black votes while campaigning against black interests to retain power. It is amazing that Hillary Clinton is now campaigning on many of these issues, but it literally took the blood of martyrs and an army of video cameras just to give her cover to do that.

But here’s something else Hillary Clinton is campaigning on: drug addiction, and part of the reason is that, like Chris Christie, I’m sure, she kept on hearing from voters in New Hampshire what a huge issue this has become for them. She says she hadn’t planned on this, was surprised to hear it, and at a certain level, it is commendable that Hillary was responsive enough to incorporate it into her campaign. And I’m not knocking Christie or Hillary for doing so, because regardless of their reasons for caring, there is considerable political risk in being “soft on crime” by supporting treatment over incarceration.

But it is an inescapable conclusion that this issue would not be getting this sort of attention were it not for the fact that New Hampshire is the first in the nation primary state, just as no one would give half a good rip about ethanol were it not for Iowa’s first caucus status. I’ve heard a lot of griping about the “nationalization” of this year’s election (particularly on MSNBC, as a way to slam rival networks’ debate criteria), but if you care about having a government that represents everyone, maybe it’s not such a bad thing to wrest some of the influence away from two states whose black population can be doubled by bringing in Roland Martin and his panel.