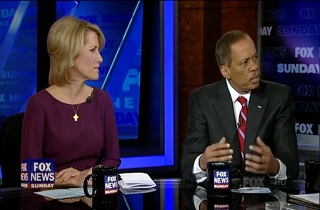 Conservative commentator Laura Ingraham got into it with liberal commentator Juan Williams on Fox News Sunday over executive authority during wartime and Senator Rand Paul‘s filibuster over drone strikes.

Ingraham, traditionally a defense hawk, agreed with Paul’s position and praised him for exciting young people and rallying some on the left to his side. While raising questions about the ability of a president to kill American citizens without a trial Paul not only build a broad and diverse coalition, Ingraham contended, but he set himself up very nicely for a presidential run in 2016 that could “shake up” the GOP.

“Rand Paul served an enormously important function during that filibuster. He wasn’t waving his hands and ranting and raving, contrary to what the Journal condescendingly said. He actually said, ‘Look, we have three branches of government, it is our solemn duty to put a check on what the executive decides to do. They want to slap the label enemy combatant on an individual and it gives the president unilateral and secret authority to order an assassination by drone or any other strike. That is something that is quite shocking to a lot of people,” Ingraham said.

Williams initially skipped over the drone strike issue focusing on another controversial executive power known as “the kill list.”

“You don’t want the president exercising this power in a vacuum,” he said.

When Williams got to the drone strike issue he insisted that the president does have the power to kill Americans in the United States without judicial oversight.

“I thought it was grandstanding, it was an internet sensation but the fact is no US citizens has ever been targeted or killed by a drone on US soil. Secondly, the Constitution gives the president authority to go after US citizens if that US citizen is somehow involved in colluding with an enemy of the United States. I mean, go back to the Civil War, of course you have that right,” he said.

“Hasn’t been done since the Civil War,” interjected Ingraham.

“I just want to say I love the fact we have the hawk, Juan Williams, and the dove, Laura Ingraham,” Wallace said.

Ingraham insisted she wasn’t a hawk, preferring the term “constitutionalist.”

“Not the dove! The constiutionalist. I know something about the Constitution,” said Ingraham.