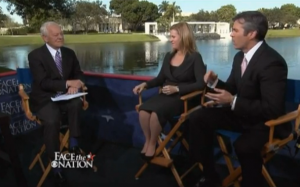 Asked about the Romnesia remark — which Obama used to paint Romney as a person with ever-changing positions — Madden replied, “The very fact that the president of the United States has to utter a term like that just is a glaring example of how small the campaign has been.”

“The Obama campaign has not been one about the future,” he said. “Instead, they’ve reduced themselves to very small attacks…along with this talk about binders, this talk about Big Bird, I mean all of it is really indicative of a candidate who doesn’t have a vision for the future.”

Cutter countered that the Obama campaign has used the binders and Big Bird remarks because they originally came from the Romney campaign.

As for binders, she said, “That’s important because it’s really symbolic of the governor’s policies. He wouldn’t say whether or not he supports equal pay for women, the Lilly Ledbetter Act. He wasn’t honest about contraception.”

Switching gears, she added, “Romnesia is a playful term of what Mitt Romney is doing in the final days of this race.”

Romney has “run as the ideal tea party candidate, severely conservative, for the last six years,” she said, “and in the last two weeks of the campaign he’s suddenly moving to the middle?”

Madden countered that we have important issues to be discussing.

“I don’t think the message to voters right now ought to be playing Scrabble with your opponent’s name when you have 23 million people struggling to find work,” he said.

The segment below, via CBS: