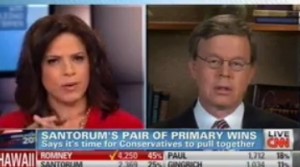 After a disappointing showing in Tuesday night’s Alabama and Mississippi primaries, former Massachusetts Governor Mitt Romney‘s presidential campaign faces a challenge in convincing people their candidate can win the support of conservatives necessary to defeat President Obama. On Wednesday morning’s Starting Point, Romney campaign adviser and former Sen. Jim Talent made what might be the wrong argument in a populist election year.

Former Pennsylvania Senator Rick Santorum came up big last night with wins in Alabama and Nississippi, states that many expected Romney and former House Speaker Newt Gingrich to split. That Santorum has been able to rack up several winning streaks against Romney despite being massively outspent, and despite the fact that Gingrich’s presence in the race siphons conservative support away from Santorum, makes those victories all the more impressive.

Conversely, the effect on Mitt Romney has been to make him look like a very weak frontrunner, one who relies heavily on big money backers to overcome Santorum’s more organic appeal to conservatives. Sen. Talent reinforce both of those negative images in his appearance on Starting Point this morning.

Citing wins in Hawaii and American Samoa, Talent pointed out that “We won more delegates than anybody else last night,” and made the argument that “because Governor Romney has a big lead, some of his voters get complacent. I think that’s what happened in Mississippi.”

CNN regular Will Cain gently rebuked that notion, saying, “With all due respect, …I think the Mississippi voters knew their vote counted. If they wanted Romney to win they should have voted for him. I think it does show that Romney has some weaknesses.”

I’m sure he didn’t mean for it to sound this way, but Sen. Talent then made the argument that, essentially, the majority of Republican voters in the remaining primary states just don’t matter. “Any election where neither Rick Santorum nor Newt Gingrich gets at least 65 to 75% of the vote,” Talent said, “is an election where we move ahead. That’s what’s happening.”

Anchor Soledad O’Brien then asked Sen. Talent about the message that all of that outspending sends. “So, outspending Rick Santorum, over $2 million is what your campaign spent on TV ad spending,” O’Brien said, “to Rick Santorum’s just under $400,000, at some point there’s a different kind of math, maybe not delegate math, that says ‘That’s bad math. He won and spent under $400 million. We took a $2 million hit.'”

“I think the numbers are something like the campaign spent $55 million, campaign alone, I’m not talking about super PAC money, $55 million as of January 31st,” she added.

“The other way of looking at that,” Sen. Talent responded, “is that if you can’t raise any money, it has a bearing on whether you’re a good candidate, and whether you can beat Barack Obama. It’s all part of being a good candidate, having an organization, having a strong message, being energetic on the stump, raising money.”

Of course, the money will be there for whomever the nominee is, and although fundraising certainly can be an indicator of support, this isn’t the year to make the case that it trumps the enthusiasm of grassroots voters. The Romney campaign needs to come up with better answers than these, if such answers exist.