Romney Advisor Concedes What We All Know: ‘The Culture Wars Are Over’ — But Will Republicans Ever Listen?
video

Romney Advisor Concedes What We All Know: ‘The Culture Wars Are Over’ — But Will Republicans Ever Listen? 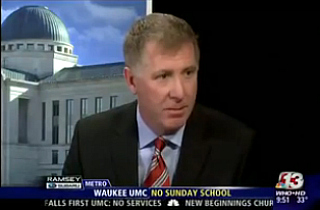 Mitt Romney‘s former Iowa campaign advisor Dave Kochel told the local NBC affiliate that the GOP needs to give up the culture war and recognize that the demographics on key social issues are undergoing major changes.

His comments should reflect a key objective for the Republicans going forward, one that will likely be dismissed as heretical and RINO-ish by the party’s Perpetual Outrage wing.

Cue outrage from the likes of NewsBusters and Rick Santorum, or, as the show’s host said, “That will anger some in your party.” But Kochel’s point truly cannot be said enough. The 2012 rape-based face-plants by Senate candidates Todd Akin and Richard Mourdock were only a tiny taste of the GOP’s defeat on social issues — three states legalized gay marriage, two legalized marijuana, and a majority of Americans now support legalizing both.

It’s sad that it takes a Republican from Iowa — the GOP primary state that practically requires you to be to the right of Santorum on social issues — to recognize that his party is losing the battle.

“If we are the party of freedom and liberty, then we should be for personal freedom and individual liberty. And that extends the marriage, as far as I’m concerned.”

This is precisely what made former GOP bigshot Jim DeMint so incredibly wrong when he claimed “you can’t be a fiscal conservative unless you’re also a social conservative.” The only consistent belief in limited government is one that wants the state to keep its tentacles out of the boardroom and the bedroom. But the Republican Party’s general inability to see those two types of “freedom” as equally important is why they have pushed away a substantially large, young “libertarian” voting base.

Abortion will always remain a split issue because many view the fetus as a life at all stages, and thus view abortion as a violation of a person’s right to live. But among the other polarizing social issues, legalized marijuana, gambling, and gay marriage all fall neatly into a consistent belief in individual liberty.

Of course, the ideal libertarian situation would be for the state to get out of marriage altogether, but since that will never happen, the next-best pro-liberty alternative is to argue that the state cannot decide which consenting couples cannot be married.

Either way, the polling trend shows that Americans are becoming more and more okay with two men or women being married. The times are undoubtedly changing, and the Republican Party would be wise to recognize that likely within 15-20 years, all states will officially recognize same-sex couples. Instead of swimming against an increasingly strong tide, the party could simply focus on issues that are actually winnable (and more consistent with their “belief” in “limited government”).

Romney advisor Kochel added that his own change of heart came from talking with his children; one of whom is a high school senior and the other is a college student:

“When they talk to me about what they care about and what their counterparts in school are talking about, it’s not gay marriage and it’s not abortion and birth control. Those are largely settled issues for young voters. And so, I think we’ve got to move past it.”

Right. You know it’s probably time to move on when a growing base of voters no longer view two men being married as something akin to this:

Luckily, Kochel’s sentiment has been echoed by some prominent Republicans. RNC chairman Reince Priebus told ConstitutionalWar.org, “The fact of the matter is we’re not going to grow our party by closing doors,” eliciting post-election forehead smacks from libertarians everywhere.

After explaining that he wants to court the young, libertarian Ron Paul fans (whom his party actively marginalized during the election season), Priebus said, “Everyone’s welcomed, especially people who love and believe in liberty, freedom, the Bill of Rights, James Madison.”

Guess those beliefs weren’t welcomed before?

Watch the Kochel clip below, via WHO-TV [h/t RawStory]: