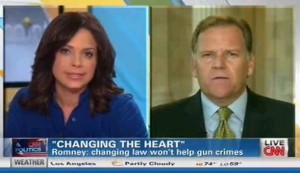 Rep. Mike Rogers (R-MI)picked up where his candidate left off with Brian Williams, spreading more lies about the weapons used to shoot down 70 people in Aurora Colorado last week. Rogers’ most egregious fabrication during his Thursday appearance on Soledad O’Brien‘s Starting Point was that the killer’s AR-15 was “not what killed the individuals in the movie theater. That weapon didn’t even function correctly.”

While Republicans, including Mitt Romney, have insisted that merely discussing gun policy is somehow an affront to decency in the wake of Friday’s mass killing, their desperation to change the subject has led them to spout utter nonsense and outright lies. Romney told Brian Williams that some of the weapons used by shooter James Holmes were “already illegal,” and that legislating firearms was futile because passing a new law won’t “make all bad things go away.”

Rogers repeated those themes, and added his own contribution to the post-Aurora pro-gun mythology.

Soledad O’Brien was trying to get Rep. Rogers to explain what Romney meant when he said that the answer to gun violence lies with “changing the heart of the American people.”

“What does that mean in the context of gun control, change the hearts of the American people when you look at the person who is alleged to have pulled off this crime and now is going to face trial for it?” O’Brien asked.

Rogers deployed the false premise that unless a single law can solve the entire problem, there’s no point in making any laws, saying “trying to point to one incident and one type of weapon isn’t going to solve this problem,” then added the Onion-worthy point that “it was against the law to have a weapon in the movie theater,” which is like pointing to the Son of Sam’s parking ticket as evidence that there was just no stopping him. He later chalked up the “heart change” needed to check the epidemic of gun violence to “this pervasive attitude that anything goes and everything is okay.”

He also said we should “allow counselors to talk to police when they make those kinds of threats,” when that’s something that mental health professionals are already required to do.

But his most egregious fabrication came when O’Brien smartly challenged the notion that you can only do one thing to try and solve a problem. “Why not challenge gun laws at the same time?” she asked, wondering if policies could include “let’s not sell AR-15sm, so a guy can order it online easily and have it delivered to his apartment?”

“But, Soledad,” Rogers replied, “that’s not what killed the individuals in the movie theater. That weapon didn’t even function correctly.”

In fact, while there are reports that the AR-15 jammed during the attack, there has been no reporting which suggests it wasn’t first fired at those moviegoers (in fact, CNN’s reporting says it was fired), let alone that none of the fatal wounds came from that weapon. So desperate are Republicans to change the subject, though, that they will say just about anything. Even if Rogers’ baseless assertion turns out to be true, it’s hard to divine what his point was; should the hope of a chance malfunction replace legislation? Should we do away with DUI laws because cars might just break down before they kill anyone?

The question of whether this is the time to have a discussion about gun policy is moot, at this point. We’re already having it. The very least we can do, though, is make sure it’s an honest one.