Romney Advisor To Harry Reid Over Allegations He Paid No Taxes: ‘Have You No Sense Of Decency, Sir?’
video

Romney Advisor To Harry Reid Over Allegations He Paid No Taxes: ‘Have You No Sense Of Decency, Sir?’ 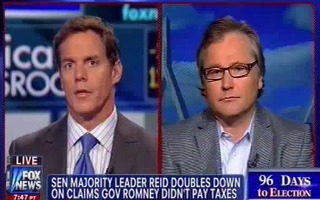 Mitt Romney’s senior campaign advisor Eric Fehrnstrom appeared on Fox News Channel on Thursday to respond to allegations made by Senate Majority Leader Harry Reid (D-NV) in which he claims that a Bain Capital investor told him that Romney had paid no taxes for a decade. “Have you no sense of decency, sir,” asked Fehrnstrom, echoing U.S. Army counsel Joseph Welsh during the infamous investigations by Sen. Joe McCarthy into Communist Party activity in the United States in the 1950s.

On Tuesday, the Huffington Post published an interview with Sen. Reid in which he related the allegation that Romney had paid nothing in taxes for ten years – though Reid added that he could not confirm the allegations. Reid further posited that Romney’s father, the late governor or Michigan George Romney, would be embarrassed by his son not releasing more than two years of tax returns.

Fox News anchor Bill Hemmer asked Fehrnstrom if Reid’s allegations were simply an effort to generate headlines and tar Romney with the specter of guilt by implication or if there was something serious behind the charges because they are coming from such a respected source.

“I don’t think there is anything behind it. He hasn’t produced any evidence,” said Fehrnstrom. “I’m telling you speaking on behalf of the governor that those charges are untrue, they are baseless and there is nothing to back them up.”

“This reminds me of the McCarthy hearings back in the 1950s,” he added.

Hemmer said that these allegations do not come from a “political hack” or a campaign operative for the Obama team but the U.S. Senate Majority Leader. “That’s why this is so sad, Bill,” Fehrnstrom replied.