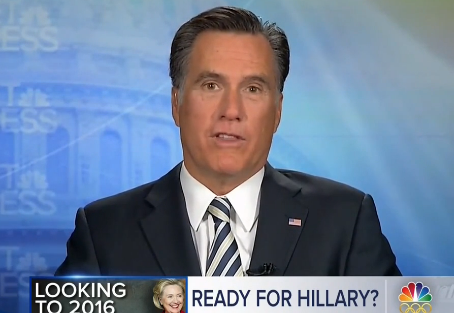 Former Massachusetts Gov. Mitt Romney, appearing on NBC’s Meet the Press on Sunday, was asked for his thoughts on the state of 2016 presidential politics and the renewed focus on the 1990s prompted by the prospect of Hillary Clinton candidacy. Romney said that, while Clinton’s record stands apart from that of her husband’s, former President Bill Clinton both “embarrassed the nation” and shirked his adult “responsibilities” as president.

Host David Gregory asked Romney if he thought it was fair for Hillary Clinton to be judged in any part on how Bill Clinton performed in office. “It’s interesting that the Republican Party now on its website is really resurrecting the ‘90s, and part of that message is keep the Clintons out of the White House again,” Gregory said.

“I think Hillary Clinton, if she becomes a nominee will have plenty to discuss about her own record,” Romney replied. “I don’t imagine that Bill Clinton is going to be a big part of it.”

RELATED: Charlie Cook Wonders If Hillary Clinton Is Too Old to Run for President

Romney conceded that the 1990s were “positive economic times” for the nation, but that period was marked by darker moments as well.

“He embarrassed the nation,” Romney said. “He breached his responsibility, I think, as an adult and as a leader in his relationship. and I think that’s very unfortunate.”

He concluded, however, by noting that Bill Clinton’s indiscretions were not Hillary Clinton’s to explain.