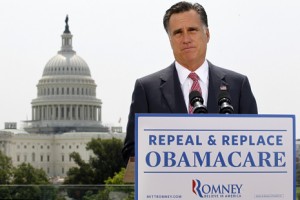 In an appearance on Fox News Channel with anchor Bill Hemmer, Mitt Romney campaign spokesperson Andrea Saul turned her defense against a controversial SuperPAC ad (which implies Romney was partially responsible for the death of former steelworker Joe Soptic‘s wife) into a de facto endorsement of President Obama‘s signature legislative accomplishment. While trying to dodge responsibility for Romney’s actions as Bain Capital CEO, Saul noted that “If people had been in Massachusetts, under Governor Romney’s health care plan, they would have had health care.”

The ad has been a hot political topic since its release Tuesday morning, and despite Hemmer’s helpful partial reading of the facts surrounding the ad, Saul stepped on a gargantuan rake by citing her candidate’s Massachusetts health care plan. Romney took a lot of flak over the plan he put into place as Governor of Massachusetts, but has tried to differentiate his plan from President Obama‘s by claiming he never supported mandated health insurance on a national level (which is a flat-out lie that the media never calls him on).

But by pointing out that Joe Soptic’s wife would have had health care had she lived in Massachusetts (although it wasn’t enacted until the year she died of cancer), Saul is not just touting Romneycare, she’s touting it as something that should have been available everywhere, while in the next breath saying that their campaign’s raison d’etre is to remove from office the man who made it available to everyone. Expect Saul to be the star of a Democratic campaign ad sometime soon.

Ms. Saul’s attempt to avoid responsibility for Romney’s actions as Bain Capital CEO is also, in a way, an acceptance of the premise of Bill Burton‘s ad. By straining to excise Romney from the GST story (when, in fact, he was unquestionably running things when the deal was made, and when Bain saddled the company with hundreds of millions in debt in order to pay themselves), Saul seems to be acknowledging that there’s something worth avoiding here. If Bain is blameless, then why go to the effort?

The answer is simple: even if you accept that Romney had nothing to do with the death of Joe Soptic’s wife (an argument the ad never explicitly makes), or even that he’s not responsible for the 2001 plant closing (even though he was CEO), the lives of the people laid off in Bain deals were never a factor in Romney’s business decisions, and as Saul so brilliantly exposed today, they won’t be a factor in his presidency. The very policy that Andrea Saul touts as a possible life-saver for people like Joe Soptic’s wife is literally at the top of Romney’s kill list.

In case you missed it, here’s the clip, from Fox News: