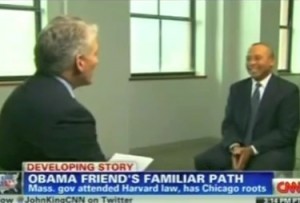 It’s Wednesday, and the Romney campaign is still complaining loudly about the Obama campaign’s examination of Mitt Romney‘s claim that his tenure at Bain Capital qualifies him to be president. The strategy has been to recast the campaign as an “attack on free enterprise,” but they undercut that argument this morning by touting a clip of Massachusetts Governor Deval Patrick saying just the opposite.

The Romney campaign released a memo to reporters with the subject line “DEMOCRAT GOV. DEVAL PATRICK: BAIN CAPITAL IS “NOT A BAD COMPANY.” (note to Romney campaign: “Democrat Gov.” might play well with hooting “NObama” Daily Caller readers, but this is a general election. Grow up.)

The memo features a transcript of this clip from CNN’s John King USA, and implores reporters to “Click Here To Watch Yet Another Democrat Defend Bain Capital.”

JOHN KING, CNN: “You’re in a very interesting position this year. I want to start with… You’re the governor of a state that Bain Capital calls its global home. It’s right up the street in Lowell headquarters.”

KING: “Are they a bad company?”

PATRICK: “No, they’re not a bad company and nobody is saying they are, including the president. It’s a remarkable thing.”

As Gov. Patrick makes clear in this brief clip, there’s another prominent Democrat who has been defending Bain Capital. See if you can guess who said this: “My view of private equity is that it is set up to maximize profits.  And that’s a healthy part of the free market.  That’s part of the role of a lot of business people.  That’s not unique to private equity.  And as I think my representatives have said repeatedly, and I will say today, I think there are folks who do good work in that area.  And there are times where they identify the capacity for the economy to create new jobs or new industries.”

That prominent Democrat was Barack Obama.

Much of the friendly fire that has been leveled at this campaign has been based on the false premise that the President is somehow attacking free enterprise (which, some would argue, he ought to be), and in most cases, is motivated by a knee-jerk panic at being seen as “anti-business.”

It’s a false premise that the Romney campaign has happily promoted, and which the mainstream media has obediently abetted. This isn’t complicated. Some of the same people who slam the Obama campaign have said, in the same breath, that Mitt Romney’s discredited claims of job creation at Bain make this a legitimate line of inquiry.

In fact, what the mainstream media have missed is the fact that not only do the President’s critics agree that Romney’s job creation claims are bunk, but the Romney campaign itself hasn’t even tried to argue the point. While the spectacle of Democrats truckling to private equity is nauseating, the longer this goes on, the longer we’re all talking about how the object of private equity is not to create jobs.