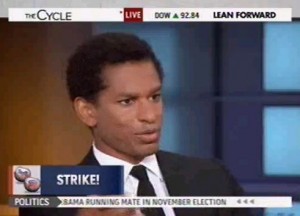 Mitt Romney‘s presidential campaign has committed a monumental error in “reaching out to NBC News President Steve Capus to discuss the matter” of The Cycle host Touré‘s comments about the campaign’s “niggerization” of President Obama. Setting aside the wisdom of even engaging the commentator on a subject that they have Jiffy-Pop-shaky ground upon which to stand, the optics of responding to a charge of racism by going to a black journalist’s white boss can’t possibly benefit them…with most voters.

What’s the end-game here? Is Capus supposed to fire Touré for doing his job, and doing it well? Set aside the merits of his commentary (which are considerable, no matter how much the political media tries to pretend, every time something like this happens, that black people just woke up that morning and suddenly decided to be offended), this is an arctic chill on free speech. Campaigns and press offices call reporters all the time, and even their editors, to voice objections, but reaching out to the president of a news organization? That’s way over the line.

Furthermore, by going over Touré’s head, they’re reinforcing his message. More to the point, they’re reinforcing the message they sent with Romney’s NAACP speech and subsequent remarks about “free stuff,” and by enlisting the aid of Welfare Queen Czar Newt Gingrich, who singled out “the African American community” for being “satisfied with food stamps,” a message that many in the GOP have been sending for a long time: black voters don’t matter. Touré doesn’t matter, he’s just a guy whose boss can be called when the help gets a little uppity. There’s an audience for that message, but Romney already has their votes locked up.

They have also handed Touré, a gifted provocateur with a burgeoning platform, the kind of megaphone that Mitt Romney could only dream of in his cheerleading days. While MSNBC has not, as yet, commented on Mediaite’s report that the Romney camp is reaching out, you can bet that sometime between 3pm and 4pm, a record number of people will hear Touré comment about it. MSNBC won’t fire Touré, they’ll tell the Romney campaign where to go, and which horse (Rafalca?} to do it on, and I wouldn’t bet $10,000 on Touré issuing an apology of any kind. Earlier, we wondered where he was, but I’m betting he’s hunched over a laptop, preparing to set the rest of the Romney campaign’s hair on fire.

In case you missed it, here’s the clip that started it all: