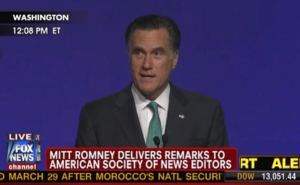 As President Obama did yesterday, Mitt Romney delivered a speech at the Associated Press luncheon on Wednesday. Among several other topics, Romney (like Obama) directly addressed the media in a not altogether positive way. Back in 2008, he said, he the media covered the speech, whereas now it’s about “what brand of jeans” he’s wearing.

Romney remarked on the industry changes he’s observed in the past few years:

One of the reporters covering our campaign is Maeve Reston of the Los Angeles Times. For Maeve’s birthday, I got her a cake and sang her a birthday song. For my birthday, she was kind enough to remind me that I’m now old enough to qualify for Medicare.

In just the few years since my last campaign, the changes in your industry are striking. Then, I looked to Drudge or FOX or CNN online to see what stories were developing. Hours after a speech, it was being dissected on the Internet. Now, it’s Twitter, and instantaneous reaction. In 2008, the coverage was about what I said in my speech. These days, it’s about what brand of jeans I am wearing and what I ate for lunch.

Most people in my position are convinced that you are biased against us. We identify with LBJ’s famous quip that if he were to walk on water, your headline would read: “President Can’t Swim.”

He added that “some people thus welcome the tumult in your industry, heralding the new voices and the unfiltered or supposedly unbiased sources.” But “frankly, in some of the new media, I find myself missing the presence of editors to exercise quality control,” he said. “I miss the days of two or more sources for a story — when at least one source was actually named.”

Romney made sure to express his confidence that the press would remain free and “provide the American people with reliable information that is vital to our lives and to our nation.” Of course, he’s hardly the first candidate to critique the media — and, in fact, Obama offered a few unsolicited suggestions about political coverage when he spoke at the AP event yesterday.

Take a look at the remarks, via Fox News: