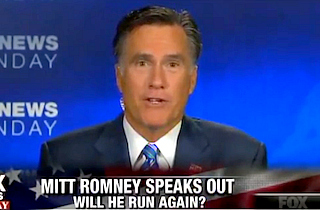 “Iv’e spoken on this topic so many times, I don’t really have anything new to do add,” Romney said. “I’m not running, I’m not planning on running.”

Wallace tried a different angle, more obtuse: “In your heart, do you still think you would make the best president than all the people out there?”

RELATED: Netflix’s Mitt Shows a Warmer Side of Romney, But It Won’t Make You Reevaluate Him

“There’s no question in my mind that I think I would have been a better president than Barack Obama has been,” Romney said. “I wish it were me. But my time has come — come and gone. I had that opportunity. I ran, I didn’t win. Now it’s time for someone else to pick up the baton.”

Romney diverted the interview back to ISIS and Russia as much as possible. “When the president is weak, bad people do bad things,” he said, taking two swipes at Obama’s golf game, and denounced Obama for not calling Russia’s incursion into eastern Ukraine an invasion. “If you can’t speak decisively, you can’t be decisive.”

Romney also criticized potential 2016 candidate Hillary Clinton. “Her record is Barack Obama’s record on foreign policy, and it’s a disaster,” he said. “Hillary Clinton and Barack Obama are two peas in the same pod, and the American people have tasted that, and said look, that’s not a good taste.”