Romney Dumps on Hillary’s Ability to ‘Accomplish Things of Significance’ 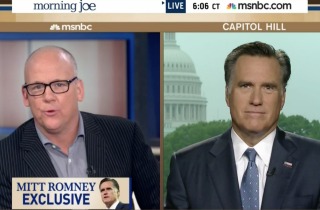 In an interview with the hosts of MSNBC’s Morning Joe, former Republican presidential candidate Mitt Romney was asked about former Secretary of State Hillary Clinton’s decision not to list the Nigerian terror group Boko Haram as an official Foreign Terrorist Organization. Romney used the opportunity to critique Clinton’s record at the State Department. He said those years were not good years for the United States abroad and her tenure in the Obama administration will be a “liability” for her if she runs for president in 2016.

Romney began by saying that Clinton needs to clarify why her State Department failed to classify Boko Haram as a terrorist organization when they orchestrated a bombing of a United Nations’ facility in Abuja in 2011.

“With regards to her career as Secretary of State , I think that’s going to be an enormous liability for her,” Romney said. “Frankly, the four years she served as secretary of state were not good years for the united states of America abroad.”

RELATED: Is Boko Haram the Story Hillary Doesn’t Want the Press to Cover?

“It’s hard to think of a nation that over the last four, five, six years, thinks more of America, respects America more today than when the president and Secretary Clinton took office,” he added. “I think it’s going to raise a lot of questions about her capacity to actually accomplish things of significance, particularly on foreign soil.”