Romney Gets Specific On Immigration Reform At Hispanic Leadership Conference 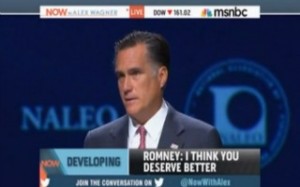 Republican presidential candidate Mitt Romney got specific on immigration issues at the Hispanic leadership conference NALEO on Thursday. Romney began with his familiar message on conservative economic reform, but he quickly pivoted to the questions raised after President Barack Obama offered a directive that imposes portions of the DREAM Act last Friday. Romney made his strongest appeal yet to Hispanic voters at Thursday’s conference.

Romney opened his address to the Latino audience with familiar economic themes.

“As you know, Hispanics have been hit disproportionately hard,” said Romney talking about the sluggish economic recovery. He said that Hispanic unemployment is at 11 percent – well over the national average.

“Over 2 million more Hispanics are living in poverty today than the day when Barack Obama took office,” Romney continued. “And yet, the president said ‘the private sector is doing fine.’”

Romney said it is true that Obama inherited the economic crisis, but he asserted that it was the Presidnet’s polices that made the recovery the slowest since the Great Depression.

Romney asked his audience to compare Obama’s record with that of Ronald Reagan’s first term – he said that after two years, President Reagan delivered a roaring economic comeback after a dramatic recession. Romney claimed that if Obama had pursued Reagan’s policies, there would be 5 million more jobs and $1 trillion in the economy.

Romney said that he lives Obama is taking Latino voters for granted. “You do have an alternative,” said Romney. “Today, I’m asking you to join me because, while we do not agree on everything, we share the same goal,” he said. He advocated for a more competitive tax system.

The former Massachusetts governor advocated for a repeal of Health Care reform, school choice and said that Obama has not completed a new trade agreement in the western hemisphere and specifically with any Latin American nation – though Obama signed long-stalled trade agreements with Panama and Colombia in October of 2011 with the assistance of Congressional Republicans that had actively pushed to move those stalled deals through the Senate.

Finally, Romney took aim at Obama’s immigration directive. He said that Obama’s directive was a “stop gap measure” which he said Obama felt would be “just enough to get him through the election.”

“Some people have asked if I will let stand the President’s executive order,” said Romney. He said that he will replace the measure with a permanent action on immigration and will work with Congress to “prioritize efforts to strength legal immigration and make it transparent and easier” and that would be his answer to Obama’s directive. He said “when I make a promise to you, I will keep it.”

Romney advocated for more visas and a high tech border fence. He drew applause for advocating for keeping immigrant families together and took aim at the present system of immigration that he called a “bureaucratic nightmare.”

“As president, I would reallocate green cards to those seeking to keep their families under one roof,” said Romney. He also called for eliminating immigration caps for the spouses and minor children of immigrants.

“Immigration reform is not just a moral imperative, it is also an economic necessity,” said Romney. He said that innovation is driven by immigrants “at a very high rate.” Romney said that immigrants are risk takers and that is a feature the economy needs. He advocated for green cards for any recipient of an advanced degree in the U.S.

“We can find common ground here, and we’ve got to,” Romney said. He went on to praise his father who was born in Mexico to American parents.

Romney’s speech to the conference took aim at every criticism he has received from the chattering classes since Obama made his Rose Garden announcement that the children of illegal immigrants no longer have to fear deportation. Of course, that measure had and continues to have broad, bipartisan support – but the way in which the president pursued it did not. Romney made the legislative pitch for true and lasting immigration reform today.

On MSNBC’s instant reaction segment, Politico’s Maggie Haberman and The Nation’s Ari Melber heard no specifics and thought Romney’s speech was a misfire that will not move the needle for him among Latino voters. Even Professor Michael Eric Dyson said that Romney’s invoking his Mexican-born father who later served as the multi-term governor of Michigan was “trying too hard.”

Maybe the needle remains static among this important voting bloc, but these commentators did not hear the same speech I did if they believe there were no specifics. While it did not address the legislative give-and-take that will be required to pass a comprehensive plan though Congress, Romney’s speech contained a number of proposals that he had not previously advanced.

What’s more, Romney made the case for lasting, legislative compromise on immigration. Perhaps a plan to court lawmakers in order to achieve lasting change, as opposed to executive fiat, is just a passé concept for some.

I suspect that this speech will not win over Romney’s critics on immigration reform. Nor will it win the plaudits of the many Hispanic organizations that remain deeply wedded to their Democratic partners, whose legislatively-bestowed patronage has been so good to their leaders over the decades. But the average Latino voter is another story.

“We can do better,” was Romney’s message today. I suspect that Latino voters know he is right.

Watch Romney’s speech below via MSNBC: