Romney Prepares To Own 47% Message: Can He Make Lemonade?
video

Romney Prepares To Own 47% Message: Can He Make Lemonade? 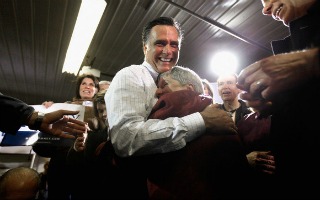 The fallout in the media over a hidden camera video which captured Mitt Romney “inelegantly” referring to the 47 percent of Americans who do not pay income taxes as President Barack Obama’s base has been overwhelming. The impact on the electorate, anecdotally at least, appears to be more muted than the outrage on the cable news networks and among the pundit class would lead you to believe. With the word out now that the Romney campaign is preparing to own these comments and frame them as an effort to push back against the president’s class warfare rhetoric, this episode may become an opportunity for Romney to make lemonade.

There is no question that Romney’s comments about those receiving some form of government support are politically distasteful. They have prompted conservative pundits, including David Brooks and Bill Kristol, and Republican politicians like Connecticut Senate candidate Linda McMahon, to distance themselves from Romney.

The Romney camp felt the need to immediately respond to this candid video by holding a late-night press conference on Monday and by sending the candidate and his surrogates onto cable news venues – Romney himself will appear on Fox News Channel today.

NBC News is now reporting that the Romney campaign not run away from these comments. They will make these comments part of the campaign and attempt to mute some of the criticism they have drawn. On Tuesday, Former New Hampshire Gov. John Sununu showed how this strategy would work by framing Romney’s remarks as their counter to the president’s class warfare rhetoric. Romney is likely to make a similar case at 4 p.m. when he joins Fox News Channel’s Neil Cavuto.

There is at least some evidence that Romney’s comments are not as damaging to the GOP candidate as they initially appeared. Speaking with Tamron Hall, Philadelphia-based liberal radio host Michael Smerconish said that he is receiving a number of calls from people who occupy that 47 percent of people who pay no income tax who seemed unaware that they should be offended.

“Will the 47 percent figure out, ‘hey, he’s talking about me,’” asked Smerconish. “Something that’s stunning to me is that I’m hearing from a number of callers who are in that group and don’t regard themselves as such.”

“There’s a bit of the, What’s The Matter With Kansas factor, if you know what I’m saying, to all of this,” Smerconish continued. “As offensive as these comments might seem to many of us, it has invigorated a conservative base who’ve been anxious for him to say something like this.”

The reason for this is simple: many, perhaps even a plurality, of Americans who pay nothing in income tax do so because they simply do not make enough in income or, like many seniors, their funds comes from sources not subject to income taxes like investments. They have worked hard in their lives and received little in assistance from the government.

No one sees themselves exclusively as a taker and not a maker. Few will think Romney is talking directly about them.

That is not to say that there will not be a number of voters who hear Romney’s comments and take offense – either because they identify with the 47 percent who pay no income taxes or because they see Romney’s comments as insufficiently empathetic. There is a chance here, however, for Romney to rally his base and to appeal to lower income voters who resent those who receive government assistance but do not need it.

Some might call such a strategy “class warfare.” They would be correct. But there is no room for outrage over such a strategy when the full slate of Democrats – judging from their nominating convention – have made inter-class resentment a centerpiece of their 2012 strategy.

If Romney plays this right, he could rescue what should be an irreparably bad set of circumstances. In doing so, he can strike a major blow against the press as the arbiters of what should or should not move public opinion.