Romney Refuses To Answer What Biggest Misconception Of Him Is: ‘I Give The Answers I Want’
video

Romney Refuses To Answer What Biggest Misconception Of Him Is: ‘I Give The Answers I Want’ 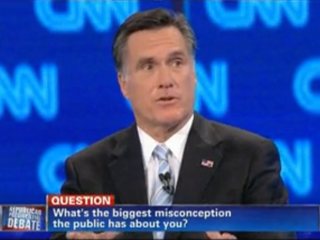 Yesterday during Piers Morgan Tonight, Governor Chris Christie said that one of the biggest misconceptions about Mitt Romney is that he is frigid, and that he instead possesses “enormous compassion.” He gave an articulate and straightforward response to his candidate’s shortcomings. Tonight, Romney had to answer that question about himself, and began to talk about the budget and other such things for so long that John King had to hop in and remind him that he was asked what the biggest misconception of him was. For this insolence, Romney struck him down: “You ask the questions you want; I give the answers I want.”

The other candidates gave quick answers about what they believed the public may think incorrectly of them– Rep. Ron Paul thought it was the misconception that he couldn’t win; Rick Santorum replied similarly. But when it came to Romney, he merely began to talk about the problems that he considered America was facing and his hope to fix them. “We’ve got to make America strong again… we’re going to have dramatic, fundamental change in Washington,” he droned. He went on for long enough that I asked myself whether I personally heard the question wrong long before King interrupted timidly, reminding him, “…and the biggest misconception about you?” Taking a page out of early Gingrich’s book, Romney treated it like a gotcha question: “you ask the questions you want– I give the answers I want.” He then proceeded to make the point that America needs “someone to lead the country” and said something about the Olympics. “If people think there is something else in my background, that they don’t want to vote for me, that’s up to them,” he continued, alluding perhaps to Obamacare, or the time he strapped his dog onto the top of his car until he became physically sick. It could be anything! He didn’t specify. Notably absent from his answer? A misconception about him that the public may have.

Many are already saying that Romney won the debate by the nature of the dynamics of Santorum coming in as the man to beat and having his back put against the wall on issues that are in his wheelhouse in the primary, but very detrimental with independents– namely, social issues. But for me, the most memorable moment of the debate will be this one: Mitt Romney faced with a softball personality question, given an opportunity to debunk absolutely any negative thing said about him in the political sphere, and refusing to answer. Not for any good reason, but because “I give the answers I want.” That he has had such a hard time getting anyone to be passionate about his campaign (well, Ann Coulter aside, but does she ever have a lukewarm disposition towards anything?) shouldn’t be a surprise to anyone after this answer.