Romney Refuses To Disavow Heckling: ‘We Do Not Believe In Unilateral Disarmament’
Audio

Romney Refuses To Disavow Heckling: ‘We Do Not Believe In Unilateral Disarmament’ 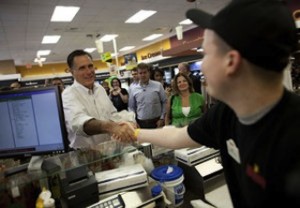 Mitt Romney said a campaign free of hecklers would be nice, but he’s not willing to tell his supporters to stand down unless President Barack Obama‘s supporters do likewise.

Former Obama adviser David Axelrod said he condemned people heckling at Romney events Sunday on Twitter after protestors gathered at a Pennsylvania convenience store Romney was scheduled to visit. In May, Axelrod was booed by supporters from the Romney campaign in Boston who blew bubbles and cheered “five more months” when Obama supporters began chanting “four more years.”

Fox anchor Brian Kilmeade asked Romney if he would follow Axelrod’s example and call for an end to heckling, but Romney said he didn’t know if a heckle-free campaign was possible.

“I know America has a long history of heckling and of free speech, but it would be very nice if we could reach that kind of conclusion,” Romney said. “I’m not sure it’s possible, but that would be a nice setting to reach.”

Romney compared getting rid of the campaign tactic to disarmament and said he would only disarm if the other side did.

President Obama used the term “unilateral disarmament” in February when discussing Super PACs, saying Democrats would continue to use them as long as Republicans despite his disapproval of them.

Listen to audio from the interview below.