Romney Roasts President Obama, Himself At The Al Smith Dinner 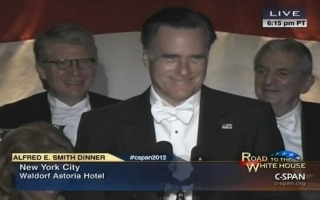 On Thursday night, Republican presidential nominee Mitt Romney delivered a lighthearted address to the guests at the Alfred Smith Dinner in New York City. During his address, Romney roasted both himself and President Barack Obama with some hard-hitting humor and biting criticisms.

RELATED: Obama Roasts Himself, Jabs At Romney And Even Elbows Chris Matthews During Al Smith Dinner

Romney opened by joking that he was glad to be able to attend the white tie function wearing “what Ann and I wear around the house.”

But Romney quickly turned from self-deprecating humor to roasting his opponent. He said he wished President Barack Obama would have bought Vice President Joe Biden with him “because he’ll laugh at anything.”

“Of course we’re down to the final months of the president’s term,” Romney said to applause. “You have to wonder what he’s think. So little time, so much to redistribute.”

“Usually when I get invited to gatherings like this, it’s just to be designated driver,” Romney joked, poking fun at his Mormon faith.

Romney said he spends the debates finding straw men to mercilessly attack. “Big Bird didn’t even see it coming,” Romney said. “In the spirit of sesame Street, the president’s remarks tonight are brought to you by the letter O and the number $16 trillion.”

Romney turned to mocking the media for their occasionally favorable coverage of the president.

“I never suggest the press is biased. They have a job to do and I have a job to do,” said Romney. “My job is to lay out a positive vision for the country, and their job is to make sure nobody finds out about it.”

Romney closed by praising his opponent and showing him a measure of genuine praise.

“We don’t carry the burden of disliking one another,” said Romney, praising Obama’s political talents and love for his family. “In our country, you can oppose someone in politics and make a confident case about their policies without any ill-will. And that’s how it is for me. There’re more to life than politics.”