Romney Slams Obama, Clinton for Naïveté on Russia: ‘This Is Not Fantasyland’
VIDEO

Romney Slams Obama, Clinton for Naïveté on Russia: ‘This Is Not Fantasyland’ 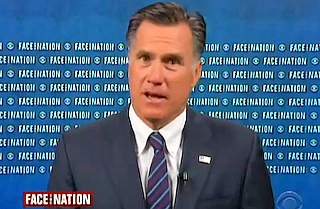 “There’s no question but that the president’s naïveté with regards to Russia and his faulty judgment about Russia’s intentions and objectives has led to a number of foreign policy challenges that we face,” Romney said. “Unfortunately, not having anticipated Russia’s intentions, the president wasn’t able to shape the kinds of events that may have been able to prevent the kinds of circumstances that you’re seeing in the Ukraine, as well as the things you’re seeing in Syria.”

“This is not fantasyland, this is reality, where they are a geopolitical adversary,” he continued. “They’re not out enemy, but they are certainly our adversary on the world stage.”

RELATED: Romney’s Not Wrong on Obama’s Mishandling of Foreign Affairs, But He’s Not Right Either

Working off his Wall Street Journal op-ed from earlier this week, Romney said that the proper time to tough with Russia was long before it invaded the Crimea, and that it was now too late to enact particularly effective measures. “Had we communicated those things,” he said, “there’s always the potential that we could have kept them from invading a country and annexing it into their own.”

“Effective leaders typically are able to see the future to a certain degree and then try and take actions to shape it in some way,” Romney continued. “That’s what this president has failed to do, and as Secretary of State Hillary Clinton as well. They thought resetting relations with Russia, handing out gifts to Russia, would somehow make Russia change its objectives. That certainly wasn’t the case.”

Romney denied, however, that we are witnessing the rebirth of the Cold War. “We haven’t entered that level of cold conflict. But we certainly recognize that Russia has very different interests than ours, that russia is going to push against us in every possible way.”