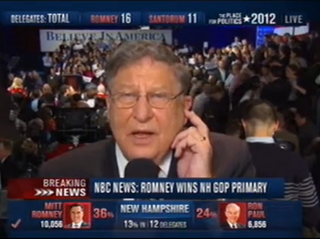 Is former New Hampshire Governor John Sununu this election’s Zell Miller? Challenging Chris Matthews to a duel was just about the only thing he didn’t shout at the MSNBC team today, as he told Ed Schultz the statistics he cited were “a crock of crap,” told Lawrence O’Donnell he didn’t “know what you’re talking about,” and challenged one of Matthews’ comments as “anti-American.”

Sununu first went after “the socialist attacks you’re getting against Mitt Romney” from Republicans, before Schultz interrupted to ask about numbers from the Tax Policy Center that claimed Romney’s tax plan would hurt the middle class at the expense of the upper classes. “I think that’s kind of strange,” Sununu responded, before adding, “There’s a technical term for that: it’s a crock of crap.”

O’Donnell then had a question for Sununu, on the fact that President George H. W. Bush did significantly better in 1992 in New Hampshire than Romney did. “You don’t know what you’re talking about!” snapped Sununu, before asking whether those numbers were from 1988. They weren’t; they were from 1992, when President Bush was an incumbent. “You’re really funny… you can’t resist it, can you? He came in as an incumbent– of course he got 50%” Sununu replied. He added that Romney had an advantage in the general election that Bush did not: “He’s running against a completely incompetent President” (presumably Sununu was talking about 1992, since Bush’s previous go-round was against Michael Dukakis).

Then it was Matthews’ turn, and he had a hardest question than the previous two, or at least a more personal one: whether Romney talking about “being unemployed” and “pink slips” “are appropriate for him to use when at no time in his like has he felt economic insecurity?”

“His success is due to his hard work… to begrudge him his success is anti-American, no?” Sununu replied. Matthews rephrased the question and got a slightly less adversarial answer: “I think what he’s talking about is reviving the soul of America.”

The only MSNBC anchor that came out of the exchange unscathed was Rachel Maddow, who stepped in just to confirm that his first comments about Romney critiques being socialist was directed against other Republicans. “They don’t sound Republican, they sound more like guys coming out of the left wing,” he concluded.