Romney Surrogate Vs. Math: ‘Let’s Trust Him On That’
video

Romney Surrogate Vs. Math: ‘Let’s Trust Him On That’ 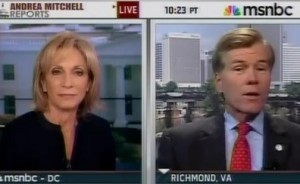 Republican White House hopefuls Mitt Romney and running mate Paul Ryan have been running away from the math on their economic plan like Dr. Richard Kimball, but as Romney surrogate and Virginia Governor Bob McDonnell (R-ULTRASOUND) demonstrated on Andrea Mitchell Reports, there is no one-armed man to clear the whole thing up. When pressed for details on which loopholes and deductions Romney and Ryan would eliminate, and which spending cuts they would pursue, McDonnell could only say “Let’s trust him on that.”

Romney and Ryan have each developed their own adorable methods of coping with ‘Rithmetic, with Romney relying on nonsense phrases like “the devil is in the details, but the angel is in the policy” (actually, they’re in the outfield), while Ryan uses a more Thomas Dolby “Blind ’em with wonk-speak” approach which makes heavy use of the mind-blanking Jedi term “baseline.”

But surrogates like Bob McDonnell, who obviously don’t have time to attend Romney/Ryan catechism to memorize their rosary of bullshit, are left to flounder. Asked by Andrea Mitchell “Where is the math? And is Mitt Romney going to be under pressure in this debate to produce the specifics as to how it will all add up?,” McDonnell went to that trusted standby, attacking the media.

Mitchell pressed McDonnell, asking “where is the math, how do you add up those tax cuts, even eliminating some deductions, which deductions you eliminate, let’s be specific. And how will you do that and reach deficit reduction, which programs will be cut?”

McDonnell’s response was to hallucinate. ” The question is, how do you get America back to work,” he said. No, the question was “where is the math, how do you add up those tax cuts, even eliminating some deductions, which deductions you eliminate, let’s be specific. And how will you do that and reach deficit reduction, which programs will be cut?”

It was two seconds ago. Try to concentrate.

Instead of math, McDonnell offered up some remedial English, repeating Ryan’s vague plan, and changing the subject again. “What Paul Ryan just said on your clip is you flatten the base and increase — excuse me, you increase the number – you reduce the number of deductions that are out there and you expand the base. That’s typically what works. That can be done in a revenue-neutral fashion and I think that’s what Paul Ryan has proposed, and what that does is make America more competitive.”

Pressed for specifics again, McDonnell offered that “Mitt Romney, I think, at least has said look, we have got to cut spending, we’re broke, we’ve overpromised, we’ve overspent…”

“But where?” Andrea interjected. “Governor, where would he cut the spending?”

“Let’s trust him on that.” McDonnell replied.

If Mitt Romney isn’t reviewing this tape at debate camp, he ought to be, because tomorrow night, he will face questions about the math, and he will be standing across the stage from a guy whom Americans trust a lot more than they do Romney.