Romney Takes On Harry Reid’s Allegations: ‘I Paid Taxes Every Year – A Lot Of Taxes’
video

Romney Takes On Harry Reid’s Allegations: ‘I Paid Taxes Every Year – A Lot Of Taxes’ 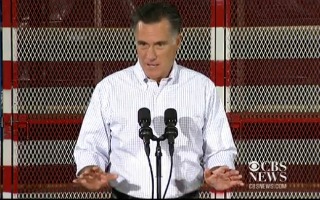 Speaking to reporters in North Las Vegas on Friday, Republican presidential candidate Mitt Romney directly addressed the accusations made by Senate Majority Leader Harry Reid (D-NV) over the week in which he claimed that a source told him that Romney paid nothing in taxes for ten years. “Harry Reid really needs to put up or shut up,” Romney began. “So, Harry, who are your sources?”

Romney went on to directly address the allegations levied by Reid that he paid no taxes for ten years.

“Let me also say categorically: I have paid taxes every year – and a lot of taxes. A lot of taxes. So, Harry is simply wrong,” said Romney.

“Give us the names of the people who put this forward,” Romney implored. “I wouldn’t be at all surprised to hear the names are people from the White House or the Obama campaign or who knows where they’re coming from.”

Romney went on to tell the audience that his tax returns from 2010 are on his website along with financial disclosure forms dating back to 2002. He also said that he intends to put his 2011 returns out when they are completed.