Romney To Gingrich: Your SuperPAC’s Ad Against Me ‘The Biggest Hoax Since Bigfoot’
video

Romney To Gingrich: Your SuperPAC’s Ad Against Me ‘The Biggest Hoax Since Bigfoot’ 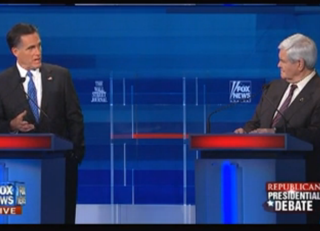 After two action-packed hours where the candidates went at each other with the proverbial kitchen sink on most issues, the elephant in the room between Mitt Romney and Newt Gingrich finally reared its head: the impact of SuperPAC ads on both of their elections. Gingrich responded to a question from Wall Street Journal‘s Gerald Seib about an attack from SuperPACs by taking a shot at Romney, who responded by clearly indicating that the SuperPAC supporting Gingrich was just as bad, and he would rather SuperPACs just “disappear.”

Gingrich responded to a question about attacks from a Romney-sympathetic SuperPAC by describing it as “typical of what both Sen. Santorum and I have complained about,” and snidely noted that it was a PAC Romney “apparently has no influence over, which makes you wonder what influence he would have if he were President.” Romney got a chance to respond, noting that he had “already said in our last debate that anything that is false in PAC ads, whether supportive of me or not, should be removed.” He continued to explain that he “can’t call these people and direct them to do that because it would violate federal law,” so Gingrich’s demand was illegal.

On the same note, Romney turned the attack around on Gingrich, saying “you have a SuperPAC that attacks me, with probably the biggest hoax since Bigfoot.” Gingrich replied that he himself had called for the SuperPAC to edit the ad, and that “the head of that group has actually submitted to your campaign a set of questions to make sure that it edited.”

Romney added on a conciliatory note that “it would be nice for SuperPAC ads to disappear,” and then called McCain/Feingold (the partially repealed Bipartisan Campaign Reform Act– a cornerstone of the legacy of Romney supporter Sen. John McCain in the Senate) “a disaster.”

The segment via Fox News below:
Jon