Romney to Hannity: Obama ‘Dramatically’ Lost His ‘Reputation for Integrity and Honesty…’
video

Romney to Hannity: Obama ‘Dramatically’ Lost His ‘Reputation for Integrity and Honesty…’ 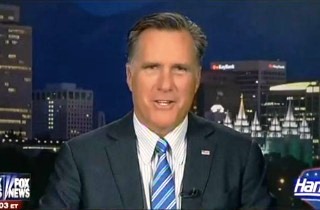 Former Massachusetts Gov. Mitt Romney appeared on Fox News Channel’s Hannity on Monday to weigh in with his thoughts on the state of national affairs more than a year after the close of the 2012 presidential campaign.

Romney told Fox host Sean Hannity that the public lost faith in President Barack Obama when the promises he made regarding the Affordable Care Act were shown to be inaccurate.

“He really didn’t have an agenda for his second term and he’s groping to find one,” Romney said of Obama. “You’re not accomplishing a real legacy as a president unless you can work with people in both parties.”

Hannity cited polling which shows that, in just over a year, the public has lot trust and faith in the president to be able to do what is best for the American people. When asked why this was not the case in 2012, Romney said that the public erroneously believed at the time that the economy had rebounded and that the president’s promises relating to the Affordable Care Act were still intact.

RELATED: Romney: I Was ‘Upset’ Candy Crowley ‘Decided That Barack Obama Was to Get the Last Word’

“It’s a very difficult thing to try and reestablish a reputation for integrity and honesty if you’ve lost it in such a dramatic way,” Romney said.

Romney pivoted to foreign policy, saying that Russian President Vladimir Putin has “outmaneuvered” Obama on a number of fronts. He added that Putin is “a terrible president” and a “thug” and that he is not comparing the two presidents directly.