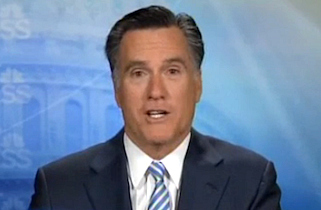 2012 Republican presidential candidate Mitt Romney spoke to Meet the Press’ David Gregory and pushed back against President Barack Obama’s comparison of the Affordable Care Act to Mitt Romney’s health care reforms in Massachusetts, arguing that “the president failed to learn the lessons that came from Massachusetts.”

“The key that has really undermined the president’s credibility in the hearts of the American people is that he went out, as a centerpiece of his campaign, and as a centerpiece of Obamacare, over the last several years, saying time and time again, that fundamentally his plan was the right people would have to keep their insurance plan,” Romney said. “He wasn’t telling the truth. I think that fundamental dishonesty has really put in peril the whole foundation of his second term.”

“Whether you like the model of Obamacare or not, the fact that the president sold it on a basis that was not true has undermined the foundation of his second term,” Romney said. “I think it’s rotting it away. The only way he can rebuild credibility is to work with Republicans and Democrats to try to rebuild the foundation.”

Gregory pressed Romney on the similarity of the plans, up to the effect both have on the ability to keep insurance plans.

“That may well be the case,” Romney replied. “But that was not what was sold with Obamacare. Obamacare barely made it through Washington. And there’s no question in my mind, but had the President been truthful and told the American people—that millions would lose their insurance and millions more would see their premiums skyrocket—had he told them that at the time that it was going through Washington, there would have been such a huge cry against it, it would not have passed.”