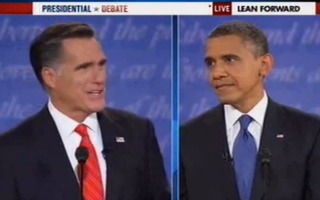 During Wednesday night’s first presidential debate, Mitt Romney challenged an assessment made by President Barack Obama that his tax plan would reduce the tax rates paid by the rich. Romney said that the Obama campaign’s insistence that he will raise rates without evidence reminded him of his children who would also insist on things that were not true but nevertheless kept repeating them.

President Obama first asserted that Romney’s tax plan would result in a tax in a cut for high income Americans while middle class families suffered from a tax increase.

Moderator Jim Lehrer tried to keep the conversation on taxes, but Romney insisted that he have the chance to correct the record.

“If the tax plan he described was a tax plan I was asked to support, I would say ‘absolutely not,’” Romney said. “I’m not looking for a $5 trillion tax cut. What I’ve said is I won’t put in place a tax cut that adds to the deficit.”

Romney went on to say that he would also not reduce the tax rates paid by the rich. “I know that you and your running mate keep saying that, and I know that’s a popular thing to say with some people, but it’s just not the case.”

“Look, I’ve got five boys,” Romney added. “I’m used to people saying something that’s not always true but just keep repeating it and ultimately hoping I’ll believe it. But that is not the case.”