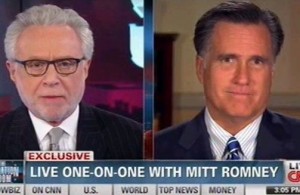 Republican presidential nominee Mitt Romney appeared on CNN with Wolf Blitzer where he was asked to get specific about his tax reform plan – what deductions and loopholes he would cut, and how he would compensate for the reduced revenue to the government. Romney did not outline what deductions he would cut explicitly, but he detailed how he thought his plan would produce growth. Romney also made clear that he intends to cap or eliminate deductions claimed by high income earning Americans as well as cut rates across the board so the government remains fully funded.

Blitzer asked Romney about his tax plan which he said the president has characterized as misleading. Blitzer asked Romney if he would get specific on the issue of what deductions and loopholes he intended on cutting to pay for a reduction in income tax rates across the board.

“I’ve made it pretty clear that my principles are; number one, simplify the code. Number two, create incentives for large business and small businesses to grow. Number three, don’t reduce the burden on high income tax payers. And, number four, remove the burden somewhat for middle income people,” said Romney. “How we would carry them out would be lowering the tax rate across the board, and then making up for that both with additional growth and with putting a limit on deductions and exemptions, particularly for people at the high end.”

Romney said he wanted to make the tax code “simpler” and “fairer.” However, he said that taxpayers would still be able to claim deductions on mortgage interest and charitable contributions.

Blitzer asked if Romney would cap the deductions that the wealthy would be able to claim, saying that he had heard a cap of $17,000 floated but not confirmed by his campaign.

“I’m not going to lay out a piece of legislation here because I intend to work together with Democrats and Republicans in Congress, but there are a number of ways you can approach this,” Romney replied. “One would be to have a total cap number – it could be $25,000, $50,00 – and people could put whatever deduction in that cap that they would like. Or, instead, you could take the posture that Bowels-Simpson did, which is going after specific deductions and limiting them in various ways.”

He said there were a number of ways to accomplish the generally stated principles which he outlined. “I don’t want to make the code less progressive,” said Romney. “I want high income people to continue to pay the same share they do today.”

Romney stressed that he wants to ensure that certain exemptions and deductions need to be enforced on high income earners in order to keep revenue flowing into the government at sustainable rates.

“Would that add up to the $4.8 or $5 trillion that’s been estimated your tax – your comprehensive tax reduction would cost,” Blitzer asked.

“The president’s charge of a $5 trillion tax cut is, obviously, inaccurate and wrong,” said Romney. He said that President Barack Obama’s deputy campaign manager Stephanie Cutter made it clear that Romney had no intention of creating any gap in revenues to the government.

“This is about getting more jobs,” said Romney. “We’re not seeing the kind of job creation America ought to see following a recession. And we’re not going to see that growth unless we have a tax policy which encourages business – small and large – to make investments and to hire people. That’s why I want to put in place the plan I described.

Romney said his plan was scored by Rice University to be likely to create 7 million new jobs while Obama’s plan would cut 700,000 jobs.

Watch the interview via CNN: