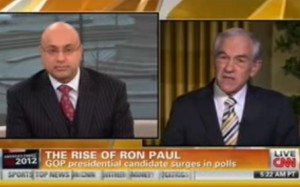 Ron Paul appeared as a guest on CNN’s American Morning Tuesday, and put on a lively, sometimes-contentious interview with Ali Velshi. The visit began in a state of calm, with talk about Paul’s surge in Iowa, as Velshi quoted a Nate Silver study that gives Paul a 52% chance of winning the caucus.

“We certainly do have a chance,” Paul said. “I think we’re in a good position. I’m really enjoying it.”

Velshi quickly got into more serious topics, like Paul’s advocating for the elimination of federal departments and, more specifically, his belief that the Federal Reserve should be scuttled. Velshi asked Paul if the Fed — and central banking as a whole — is a major problem:

“How can you deny it when you look at the world crisis? We’re in the worst financial crisis in all of history. To defend central banking and ignore the fact that central banking has brought us to this crisis? People are living with blindfolders on.”

Paul later added, “We encourage this idea of spending money instead of saving money.”

Velshi then brought up quotes attributed to a Paul newsletter from 20 years ago that included racist and prejudiced ideals. Paul has disavowed them several times and contends that a person on his staff of six to eight people wrote it. He added that he was practicing medicine at the time and didn’t have much oversight with the newsletter.

When Velshi pressed Paul on the topic, the GOP candidate challenged people to read everything he’s said or written, at which point they’d realize the comments were a glaring anomaly. “These charges are a total contradiction to everything I’ve said and everything I believe.”

Velshi asked Paul if the media establishment had been fair to him. Paul began by laughing.

“You mean whether they’re biased?”

“Okay, do you think they’re biased against you?”

“Well why don’t you go look at Jon Stewart‘s reports when he defends me on the bias of the media. He mocked the media for the way they’ve treated me through the campaign. But I don’t get upset about that. That’s just the way you guys work. It’s no big deal to me. And the more progress I make in challenging the status quo, the stronger they will emphasize picking this and ignoring the important issues of what freedom is all about.”

Paul then brought the conversation back to the comments Velshi brought up earlier.

“Why don’t you go look at … a lot of comments [I’ve made] on the war on drugs and how racist the enforcement of drug laws are?”

“Yeah, you know, you don’t. You don’t. You just — you’re concentrating on something else. So somebody, some day, ought to look at the whole picture rather than picking out something I didn’t write and I have disavowed.”

“It’s the cost of surging in the polls,” Velshi concluded, as the two talked over each other, before cutting Paul off for a commercial break.