Ron Paul Dismisses Newt Gingrich As ‘Flavor Of The Week’ 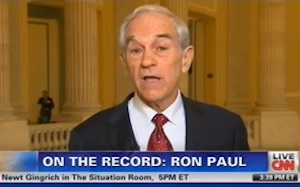 Congressman Ron Paul appeared on CNN Newroom Wednesday and was questioned by anchor Brooke Baldwin about whether Newt Gingrich was the new frontrunner for the Republican presidential nomination. “He’s the flavor of the week, so we don’t know what it will be next week,” Paul countered.

RELATED: Herman Cain: I’m Not The Flavor Of The Month, ‘I’m Black Walnut!’

“Not the front runner then you say?” Baldwin asked.

“He has to be there for more than a week,” argued Paul. “The only thing that really counts is a month from now and if you look at our growth in the polls, I mean, ours is steady. One thing that nobody takes away from me is that it’s not solid. People don’t come and go once they support our campaign. We were in high single digits six months ago, we’re in high double digits now, in second and third place solidly. I say we just keep doing what we are doing now and we will have a very good showing come January.”

“Is it at all frustrating to you Congressman — you’ve been out there, built the solid organization in Iowa, the nuts and bolts, and then you have this man, Newt Gingrich, really no organization to speak of, have him sort of swoop in, charming the pants off these Iowans?” Baldwin questioned. “Does that bug you?”

“I wouldn’t use that,” Paul replied. “But just remember, easy come, easy go. We’ll worry about that later on. I don’t think it’s all that solid. He’s the fourth person to have done this. So why should you assume that the nomination is locked in?”