Ron Paul Doubles Down On Calling Newt Gingrich A ‘Chickenhawk’, Says He Would Call Him It Again 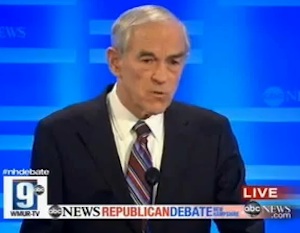 During the New Hampshire GOP Debate, moderator Diane Sawyer asked Ron Paul if he would call Newt Gingrich a “chickenhawk” again, Paul answered in the affirmative. “Yeah. I think people who don’t serve when they could and they get three or four or even five deferments, they have no right to send our kids off to war…I’m trying to stop the wars. At least I went when they called me up.”

RELATED: Rick Santorum Zings Ron Paul Over Mic Trouble: ‘It Caught You Not Telling The Truth’

Paul had earlier used the term in an interview with CNN’s Soledad O’Brien to slam the former Speaker of the House for voting to send American troops into war without himself having served in the military.

“I don’t like it when we send our kids off to fight these wars and when those individuals didn’t go themselves, and then come up and when they’re asked, they say, oh, I don’t think one person could have made a difference!” Paul exclaimed. “I have a pet peeve that annoys me to a great deal, because when I see these young men coming back, my heart weeps for them.”

“Dr. Paul has a long history of saying things that are inaccurate and false,” Gingrich hit back. “The fact is, I never asked for a deferment… I personally resent the kind of comments and aspersions he routinely makes without accurate information and then just slurs people with.”

Watch Paul double down on calling Gingrich a “chickenhawk” below via ABC News: