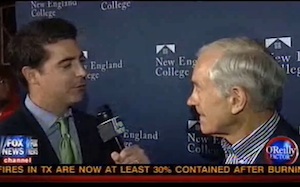 While the GOP debate raged on another channel last night, Fox News’ Bill O’Reilly was having some fun with persistent contender Ron Paul, in particular Paul’s assertion that he’s been ignored by the media. While it’s true that Paul has received far less coverage than other candidates (particularly relative to his poll numbers), it’s also fair to say that Paul hasn’t exactly accepted every invite, or so claims by O’Reilly. Producer Jesse Watters caught up with Paul to ask him why he is “dodging” The Factor.

Longtime viewers of O’Reilly know that he has offered an invite to Paul to come on his show for some time now, which makes it odd that Paul hasn’t taken him up on it. The Texas congressman seemed confused by the question, claiming that he wasn’t exactly sure he’d ever been formally invited, which doesn’t really add up, since O’Reilly has proclaimed it on his show repeatedly. The claim that “O’Reilly’s not really a journalist,” doesn’t really hold up, either, considering how often Paul has appeared on a variety of other opinion media programs. He participated in a debate with a Barack Obama impersonator, which isn’t necessarily following accepted journalistic standards either.

The truth is, a Ron Paul and Bill O’Reilly discussion would be delightfully entertaining to watch. While they have somewhat similar politics (though O’Reilly self-defines as a “traditionalist”), they each consistently avoid canned talking points, choosing instead to call it as they see it. Regardless of your political beliefs, the off-the-cuff candor is refreshing in this day and age.

We’ve long been proponents for politicians and elected officials appearing on The O’Reilly Factor, and here’s hoping that after this back and forth, we can expect to see Ron Paul with Bill O’Reilly soon. I will be jiffily popping the corn.