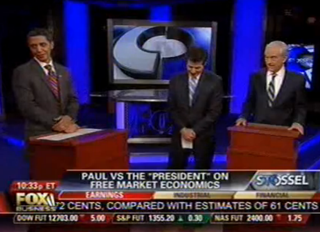 While America waits with bated breath for the first presidential debate of the 2012 season– to see who will show up more than anything else– some have taken a more proactive attitude toward making it happen. Take Fox’s John Stossel, for example, who managed to convince 2012 candidate Rep. Ron Paul to debate an actor playing President Barack Obama on his program this week.

This exercise, airing last Thursday night on Stossel, is entirely bizarre– from the questionable makeup on the actor to the Paul-loving audience who actually boos the “President” walking in down to the fact that, for this debate to actually happen, Ron Paul would have to be the 2012 Republican nominee. Yes, I know what you’re thinking– no one is going to take that nomination away from Donald Trump. And you’re right! But the absurdity of imagining Rep. Paul debate President Obama (actually actor Richie Brown) is still not lost, even in this exercise.

After the requisite booing and hissing at the President, the debate got underway, and “Obama,” using mostly actual statements by the President, debated Rep. Paul on every issue Paul is know for doing well in– national spending, government regulation, even theoretical libertarian principles. While Rep. Paul demanded the federal government “quit spending money across the board,” “Obama” insisted that the government has a responsibility to maintain infrastructure and promote industry, making a Sputnik reference and calling for more technology funding and higher taxes. Rep. Paul did cede that there was one group of people he would like the see taxed more: corporate entities. “If someone has made all of their profits on taxpayers back, I’m taxing them,” he declared to applause.