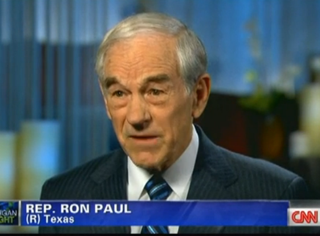 Piers Morgan got to sit down with Rep. Ron Paul last time and ran the gamut of topics– from Mitt Romney to the Congressman’s exercise regimen. Rep. Paul was relaxed and cheerful to be there, but was taken a bit by surprise when Morgan tried to explain Rep. Paul’s position in the race, and found himself comparing Rep. Paul to Sylvester Stallone.

“The last time I dined in this restaurant I was with Sylvester Stallone,” Morgan told him, “and the parallel to me is clear: you are the Rocky Balboa of this campaign. How do you feel about that analogy?” Rep. Paul looked stunned for a bit and replied, “I have no idea how to respond to that. I hope that is very positive, it sounds like it could be!” Morgan did explain himself though– that Rep. Paul was the underdog in the race, that he was steadfast, and his beliefs never wavered.

But on that note, Morgan also asked whether it was possible that that, too, was a bad thing: “if you never change your mind about anything, is that in itself healthy?” Rep. Paul noted that he did not see himself as bullheaded about his commitment to his ideas, and that while did the concept of liberty did not change, “you can refine it.” Morgan noted all his young supporters, and gave some of the credit for those to him, but also considered Rep. Paul “very energetic,” and asked for some health tips. Rep. Paul then became Dr. Paul again for a bit, and described his morning routine when not running for president, which involves a lot of bike riding and good eating (“no white things– sugar and the like”). “But I think my parents had a lot to do with my good health,” he noted.

The conversation then lead to a discussion of health insurance and American work ethic. Rep. Paul repeated that Americans could not be “depending on the government– they’re not there, they’re bankrupt.” Morgan countered that he found something somewhat callous about the idea that “if you can’t afford insurance, you’ve got to fend for yourself.” “It’s a lot more compassionate than the way it might sound,” Rep. Paul noted, adding that “if you see the extent of total socialism, it’s not very compassionate at all.” He concluded that the philosophy behind that is “you can’t use violence to get what you want, but you can’t use the government to use violence, either.”