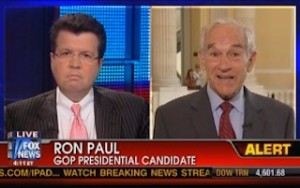 Ron Paul appeared on Your World with Neil Cavuto to strike back at Dick Cheney‘s implicit dis of the Congressman (“There are nominees that I’m not enthusiastic about…not likely to get the nomination”), calling the former Vice President “a dictator.”

Host Neil Cavuto paraphrased Cheney’s interview on his show, quoting that he thought the feisty Libertarian didn’t have a chance to become the nominee, and Paul’s stance on “pulling up soldiers boots from around the world” was risky.

“We’ll have to prove him wrong,” responded Paul. “I’m quite competent about the foreign policy that I advocate, we’ll have to prove him wrong by winning some elections. When he says he’ll support all Republicans except some like myself, which means that he wants to be the dictator… ‘I will decide who will decide who’s a true Republican or not.’ And I say he doesn’t have that authority! The people have the authority. He just might come up short on his desire… I’m very confident that we’re going to continue to surprise a lot of people.”

Cavuto followed up by adding that Cheney was shocked by Paul’s view that the US shouldn’t interfere with countries like Iran possessing nuclear weapons.

Cavuto pressed that Iran would be more dangerous with a nuclear weapon in the hands of Ahmadinejad, who has a history of aberrant behavior.

“How could they be any worse than Khrushchev saying he would bury us and he had the capacity to do it.” Paul countered. “I would say what we ought to be more cautious about is this glib acceptance that we can go to war in another country because if you want to stop him, you have to go to war with Iran. And that to me is careless, war-mongering, very, very dangerous– much more dangerous than another country having a nuclear weapon that’s not on the verge of committing suicide. They wouldn’t dare, with one weapon and Israel has 300?! We have to put this in a proper perspective and get back to our common sense.”