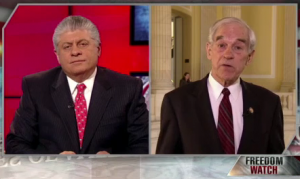 Republican Congressman Ron Paul appeared with Judge Napolitano last night on Fox Business in order to continue his crusade against the Federal Reserve. In addition, Paul provided a unique perspective on international affairs declaring “we’re not successful in Iraq or Afghanistan, as far as I’m concerned” and expressed shock at the suggestion of using the military in any capacity to help in Libya.

After a lengthy discussion on the Fed, Paul concluded Chairman Ben Bernanke or any chairman is “incapable of telling the truth” because they are “paid to deceive the marketplace and deceive the people into thinking that things are much better than they really are.” Instead, Paul viewed it as his role to speak the truth to Americans. Yet his harshest shots were saved for Senator John Kerry and Secretary of State Hillary Clinton who he claimed still have not learned the lessons of Iraq and Afghanistan as they leave military options on the table with respect to Libya.

Paul wondered, “how many innocent people have been killed in Afghanistan and Iraq at the hands of our military and we’re flat out broke – we don’t have more troops.” More controversially, since the US-backed Maliki government in Iraq recently arrested 300 demonstrators, Paul declared “I would say that our success at providing a free society for Iraq is a total failure and they do not have freedom. There’s less freedom of religion there – the Christians have all been run out. Even under that horrible dictator Saddam Hussein – he was more tolerant of Christianity than the current government is in Iraq.” And just to leave no controversial stone unturned, Paul also predicted that the American government is now actively working towards propping up a new dictator in Egypt.

With ideas like these, if he does decide to run for President again, Paul’s inclusion in another round of primary debates would certainly guarantee there’s never a dull moment.