Ron Paul: Media Ignores Me Because They’re Scared Of Us Challenging The Status Quo 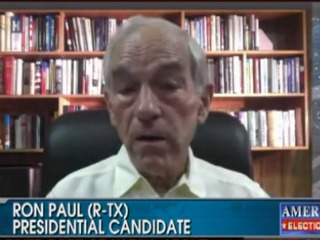 Last night, the Daily Show‘s Jon Stewart took the media to task for essentially ignoring the fact that, hi, Ron Paul 1) exists and 2) is doing just fine, if the Iowa straw poll is any indication. Megyn Kelly had Paul on her show this afternoon to discuss that very phenomenon . So, now, it appears that talking about how no one is talking Ron Paul can get us all talking about Ron Paul. (♥ Ron Paul, Ron Paul, Ron Paul! ♥)

Kelly asked Paul point blank whether the media is, in fact, ignoring him. Paul’s answer was, rather refreshingly, just as straightforward:

Sure. Yeah, they are and we need to ask them why. I mean, what are they afraid of? We’re doing well, we’re certainly in the top tier, we did well in Iowa and we have a good organization, we can raise money. But they don’t want to discuss my views because I think they’re frightened by us challenging the status quo and the establishment when it comes to foreign policy and monetary policy, the entitlement system, because my views are quite different than the other candidates’, so they would just as soon us not get the coverage the others are getting and they will concentrate on establishment-type politicians.

Paul also provided quite a savvy assessment of why publications like The Wall Street Journal have essentially written him off as a viable candidate: They want to promote an idea, not information. He also says Democrats are challenged by his views because they go right up against Barack Obama‘s, particularly on issues that see Obama losing his base. That said, Paul is willing to go head-to-head with the President “any time of the day.”

Besides, his mission is bigger than simply getting elected:

I don’t use the word “frustrating” because I think I anticipate and I know how the system works and I know what I’m trying to do, because it’s not like I’m just trying to win and get elected; I’m trying to change the course of history.

And our history in this country hasn’t been good for the last hundred years, whether it’s our drift into manage an empire, the destruction of our currency, the deficits that have been run up, the climax of the dollar reserve standard — this is big stuff and nobody else is addressing this.

Paul went into detail about his views, lamenting the fact that the media fails to ask him “the right questions.” (We’re guessing “What do you think about Newsweek‘s Michele Bachmann cover?” would not sit incredibly well with Congressman Paul.)

On foreign policy, Paul says he is basically running on George W. Bush’s platform as it existed back in 2000.

Take a look at the interview, courtesy of Fox News: