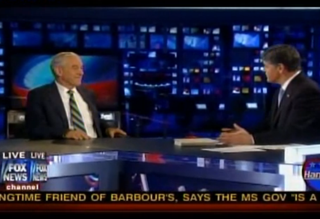 Rep. Ron Paul has some big news to break tomorrow, but he broke it to Sean Hannity today, anyway: he is launching an exploratory committee for the 2012 presidency tomorrow which, “if I don’t get booed too much,” may lead to a presidential bid. As this was the first time the two met, Hannity pressed Rep. Paul on his conservative bona fides and found himself on a side of the argument he rarely sees: his concern with Muslims, Rep. Paul argued, challenges the principles that make America great.

Hannity and Rep. Paul, as mentioned before, had yet to meet on his program, though Hannity didn’t exactly have the best of histories with Paul enthusiasts– in 2008, while covering that year’s election, Paul supporters pelted Hannity and his crew with snowballs while yelling various incarnations of “you suck” at him. Hannity, of course, did not decline the opportunity to bring up the occasion, to which Rep. Paul replied jokingly, “we believe in non-violence!” Paul later gave his supporters their marching orders– “I’m going to advise them, I don’t tell people what to do… [but] we believe in tolerance and non-violence.”

That was the extent of the levity between the two, however, as Hannity pressed Rep. Paul on his foreign policy claims, what he would do to lower the national debt, and his opinion of radical Islam. On the latter the two butted heads for some time, as Rep. Paul insisted that “you don’t want to blame the religion” and, specifically in the case of the so-called “Ground Zero Mosque,” property rights, not xenophobia, should prevail. “We should have governments building buildings and telling people where to go,” Rep. Paul argued, though Hannity didn’t buy it. Noting that the head of that project, Imam Feisal Abdul Rauf, had said he wanted America to be “Sharia compliant,” which would be “the antithesis of everything we believe in.”

Rep. Paul seemed unconcerned about Sharia– “you defend [America] by a better idea,” he argued, “you defend it by the Constitution.” Moreover, Rep. Paul seemed to fear Hannity’s fear of Sharia Law more than the law itself: “I think you’re closing the door on what makes America great.”

Rep. Paul eventually went back to his bread and butter: America needs to stop spending money overseas, stop printing money, take down the Federal Reserve, etc., but for most who haven’t taken more than a casual look at Paul as a candidate, his stance on the War on Terror may be the strongest takeaway from his chat with Hannity.