Ron Paul On Today’s Election: ‘I Assume The Victor Today Will Be The Status Quo’
Video

Ron Paul On Today’s Election: ‘I Assume The Victor Today Will Be The Status Quo’ 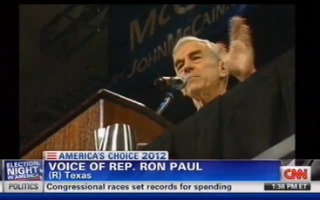 Former Republican presidential hopeful Ron Paul called in to CNN Tuesday afternoon, where anchor Brooke Baldwin asked whether he was now ready to throw his support behind either candidate.

Paul said he wasn’t “quite yet” willing to do so, adding that either candidate would simply enforce the status quo:

I don’t think there’s enough difference between the two candidates, and I assume the victor today will be the status quo because I think the status quo’s been up and there’s no competition. So we’re going continue with basically the same policies that we’ve had for a long time. So I don’t see the election as — the way it’s turning out to to be very crucial at all. […]

I would say either person would carry on the status quo because they essentially endorse, you know, government-managed medical care variations, you know, a little bit. They endorse the same foreign policy of having our troops around the world and doing a lot of things I don’t believe in, endorsed the monetary system. They haven’t addressed the subject of cutting spending.

Furthermore, Paul said that while he’s “indifferent” to the amount of money being thrown around in this election, he believes Americans should ask “Why are they doing it? Why have they been hoodwinked into thinking there’s a real contest going on?”

“If I were independently wealthy,” he continued, “and not involved in the campaign and had a lot of money and people — both parties — were undermining my liberties and taking away my 4th amendment rights in pursuing bills like the Patriot Act and assassination of American citizens, i should be able to spend all of the money I want on trying to tell the people that there’s something wrong with the system. So it’s how they spend it. What’s wrong is all of this money’s being spent to influence and control and own government to be used for their benefit, people with special interests. And that’s what’s wrong. It’s how they spend it, not the principle of spending money and being able to lobby and petition, you know, the politicians and then trying to change things.”

Have a listen, via CNN: