Ron Paul: Putin Has ‘Law on His Side’ with Crimean Invasion
video

Ron Paul: Putin Has ‘Law on His Side’ with Crimean Invasion 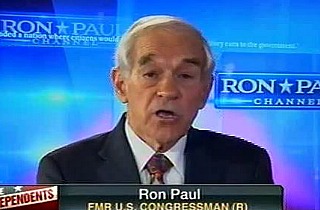 Former Rep. Ron Paul (R-TX) appeared on the Fox Business Network’s The Independents on Wednesday night where he was asked for his thoughts about the worsening situation in Ukraine’s Crimean peninsula. Paul said that the United States and the West have engaged in hypocrisy and alleged that they participated in the overthrow of Viktor Yanukovich’s government. He added that Russian President Vladimir Putin has “some law on his side” in Crimea because Russia held a lease on a naval base in the Crimean city of Sevastopol.

“This whole thing that Putin is the big cause of the trouble, and yet there’s pretty good evidence that the Europeans as well as the American government had to contrive to have the overthrow of a government that most people say had been elected,” Paul asserted.

“And then for them to come along and say, ‘Well, it’s an illegal government,’ and they want to have a referendum now, you know, in Crimea, ‘Oh, no, that’s not permissible,’” Paul continued. “Everything that Putin does is illegal. He’s no angel, but actually he has some law on his side.”

Paul asserted that “contracts, and agreements, and treaties” associated with the Sevastopol base provide Putin with the legal basis to militarily occupy the peninsula. He said that Russia could accuse America of occupying Cuba because it, too, holds a lease on the land around the Guantanamo Bay prison.

“It’s such a façade,” he continued.

Host Matt Welch asked if Crimea’s snap referendum, scheduled to be held on Sunday, could really be considered legitimate given that it is being orchestrated by an occupational government “in the shadow” of the Russian government amassing forces on the Ukrainian border.

“Yeah,” Paul said. “I don’t think we should do all that threatening.” Welch attempted to clarify his question, but Paul went on to say that the Crimean invasion is being used as an “excuse” to erect interceptor missiles in “Russia’s backyard.”

“There should be a right of secession,” Paul concluded. He said America has a tradition of secession and Crimea should have it as well.

Watch the clip below, via FBN: