Rep. Ron Paul Reacts To Trump’s Debate Invite: ‘Beneath The Office Of The Presidency’
video

Rep. Ron Paul Reacts To Trump’s Debate Invite: ‘Beneath The Office Of The Presidency’ 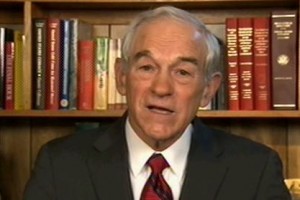 Ron Paul has been slowly rising in the polls, ahead of politically mainstream candidates in some states. So when Donald Trump announced he would be sponsoring a Republican debate, the congressman did what any rational human being would have done: he declined the invite, calling the debate “beneath the office of the presidency.” Today on CNN’s State of the Union, Paul explained just exactly how little he cared about attended the Trump debate.

Candy Crowley asked Paul if he thought the debate would be damaging to the Republican party. Paul gave a small “yeah,” suggesting he really couldn’t care less about it.

RELATED: Karl Rove Is Completely Baffled By The Trump Debate: ‘This Is Weird, Isn’t It?’

But Paul did the smart thing in his public statement refusing to appear at the debate: he gave a legitimate political reason why no Republican should care about Trump’s input. As he explained in his CNN appearance, Paul was speaking for Iowa Republicans who were toyed with by Trump by dropping out of the race after they set up a huge event for him then having them cancel the event. Paul explained he received positive feedback from state party officials who are apparently still mad with Trump about the snub.

And then, Ron Paul said the one thing about Donald Trump’s fame the rest of us have been screaming for years: “I don’t understand it.” He expressed surprise at the Donald’s power to get people to fall in line. Note how eager Newt Gingrich sounded to participate in the debate yesterday. He compared Trump to Bill Gates, and boasted he would proudly go to a debate sponsored by either man.

Paul also surmised that Donald Trump “does not like to be challenged” on the issues. Well, that is just absurd. Trump is not thin-skinned, and he proved as much by responding thusly to Paul’s critique.

“Few people take Ron Paul seriously and many of his views and presentation make him a clown-like candidate… I am glad he and Jon Huntsman, who has inconsequential poll numbers or a chance of winning, will not be attending the debate and wasting the time of the viewers who are trying very hard to make a very important decision,”

There is something about Donald Trump being involved in choosing the next leader of the free world that makes my socially-conscious side cry but gives my nihilistic side hope.

Look, Gingrich said he was going for the entertainment value of it, which would be the only reason any living breathing human would tune in to watch, but this is a presidential election. It’s getting too much like a reality show already. My worry is if we actually turn it into a reality show by allowing Trump to moderate the debate, the Republican primary election will fold in on itself and pop out of the spacetime continuum. Granted, it would be good news for Obama, but still.