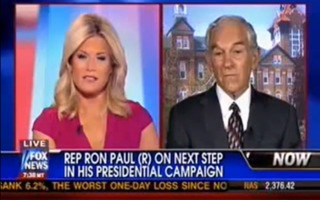 Texas Rep. Ron Paul (R) appeared on Fox News today to discuss his thoughts on the “emergence” of fellow Texan Rick Perry onto the GOP candidate field, the back-and-forth brewing between Perry’s campaign and former “Bushies,” as well as that odd anti-Perry ad published by a Paul supporter.

It would appear that Paul isn’t terribly worried about Perry posing a threat to his own campaign:

This might be a flash. Who knows what it is? I don’t think it’s a surprise. Everybody knew he was coming in. He’s governor of a big state, so he will, you know, get some credibility just for that. So many have entered, you know, over this race over the past year. They have come for a few months or so and then they leave and get a lot of publicity.

I’m saying he may not… in two or three weeks, people will have asked him a lot more questions and his views will be more well known, then you have to ask about, you know, the significance of his entry. For me, the significance is he doesn’t threaten my campaign, our campaign, because his views are more conventional. They are more status quo. They are more part of the whole system, so he doesn’t talk about bringing troops home or anything of these — or any of these things. I think he will dilute the other votes in opposition to our campaign.

Later, Paul was asked about the recent ad placed by a campaign supporter seeking out people who may have slept with Perry. He wouldn’t take the bait:

Well, I don’t know how something like that qualifies as a question on national TV as if it’s something serious. I would say it speaks for itself. And for me to address — this is news to me, I don’t know anything about it. For me to address it would give it too much credibility. And I think bringing it up gives it more credibility than it deserves. It’s rather silly. How can this be a significant issue in a presidential race?

Paul later added that he didn’t care to monitor the actions of those who support him and would rather ignore things like the Perry ad.

Have a look at Paul’s interview on Fox News: