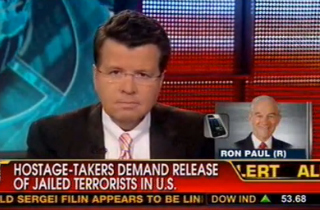 Appearing on Fox’s Your World this afternoon, retired Rep. Ron Paul (R-TX) did not hold back about his thoughts on the “blowback” consequences from America’s “kings of the world” style of foreign policy. Host Neil Cavuto appeared to have reservations about Rep. Paul’s claims, but the real pushback came from the guest following the retired congressman.

In light of the ongoing hostage crisis in Algeria, Cavuto asked Paul to comment on whether America should intervene more in the Middle East. The retired congressman, famous for his anti-interventionist views, said absolutely not:

I think it would be foolish. I think what we’ve been doing for so many years has been so very foolish. I think they ought to understand what ‘blowback’ is all about, and what the CIA has talked about. It’s just way too much. It hurts us to no end. One of the points I made when I gave my last little talk on the House floor was that one of the trends and problems we are facing was violent anti-Americanism. It’s all over the world. That is what is happening. We have a mess in Egypt now. We don’t know exactly what we are supposed to be doing in Syria. […] I say what is happening in Mali and the hostages, it’s a spinoff from us getting involved in Libya and getting rid of [Muammar] Guaddafi. One thing leads to another. All these problems we have makes my case clear that we should have followed the Founders’ advice of staying out the entangling alliances and staying out of internal affairs of other nations, mind our own business and save a dollar now and then, because we’re flat-out broke.

Cavuto pushed back that some might say we’ll “regret” the non-intervention because “we’ll give the bad guys a free run.” Noting that terrorists are “not idiots,” the host mentioned that they have the ability to pack up and run from whichever country we are currently battling; and so, he asked, “Should we do anything about that or do we just let them brazenly go unobstructed?”

Cavuto then asked: “What if they really hate us, they have everything we stand for, and … they just can’t stand us, they want us dead?”

“They might ask the same question,” Paul said. “What if we didn’t hate Muslims? We have to bring up a lot of hatred to go 6,000 miles away and kill people with drones. This is where the conflict is coming. We have to beat the drums of war in this hatred and go over and do these things and then all of a sudden we have an epidemic of suicides of American soldiers that come back, who ask, ‘What am I doing over here shooting drone missiles and little kids dying?'”

He continued on to say, “It’s a failed policy,” adding that we fail to understand that there is “blowback” from our involvement overseas, and that “if we don’t accept that, it is going to get much worse.”

“It’s going to get a lot worse as long as we think we are the king of the world,” he concluded.

Cavuto then ended the segment, thanking Dr. Paul and adding a jokey “I think” at the end to indicate his hesitation to imply agreement with anything the staunchly libertarian congressman had said.

And then when Cavuto turned to former CIA agent Wayne Simmons to discuss a related topic, the ex-agent asked to first fire back at the congressman’s remarks: “[He said] we shouldn’t act like kings of the world. Well, if we acted like kings of the world much more often and showed how powerful we were, we wouldn’t have all the mayhem.”