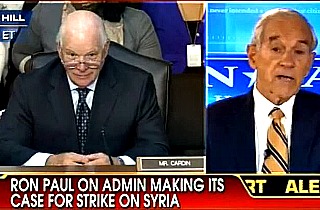 “How many people do we have to kill?” former Rep. Ron Paul (R-TX) told Fox News Channel host Neil Cavuto on Tuesday. Discussing the plan for a possible intervention in Syria after government forces used chemical weapons on civilians, Paul said that if the president does not get a vote in Congress authorizing Syrian intervention, it would represent “the beginning of the end” of the “American empire.”

“I think there is a sea change,” Paul said of the debate over Syrian intervention. “The American people are waking up. They are tired of it. They don’t have the money.”

Paul said that one of the few reasons America is contemplating intervention in Syria is because President Barack Obama drew a “red line” at the use of chemical weapons.

When asked by Cavuto if there would be no intervention had Obama not drawn his “red line,” Paul said it was entirely possible. He insisted that Republicans quickly politicized Obama’s statement on Syria.

“The McCain-ites and the Lindsey Grahams, they love this stuff,” Paul said. “They’ve been screaming for war for two years.”

“Why do we have to always solve these arguments within a country – civil strife, civil wars – with our military?” Paul asked. “It’s getting old. The people don’t like it. We can’t afford it. It’s going to cost billions of dollars.”

Paul advised the Congress not to give Obama authority to attack Syria. He said that the president has repeatedly stated that does not need authorization in order to attack Syria and that authority will only be abused.

“If Obama doesn’t get this vote, this is the beginning of the end, and fortunately so, for the American empire,” Paul said. “It would be a great victory for the cause of liberty and peace.”