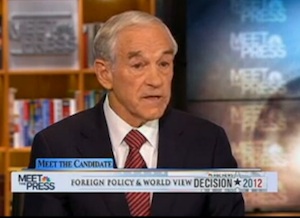 Ron Paul told David Gregory on this morning’s Meet The Press that he believed troops would ultimately never leave Iraq in response to President Obama‘s announcement that all soldiers stationed there would be coming home by year’s end. “We’ll change their names,” said Paul. “I mean, they’ve already admitted there (still) will be 15,000 but, you know, they’ve morphed the private sector with the military. The CIA and contractors, it’s a mixture. There’s going to be 15,000 in the armed camp. The biggest embassy in the world. (Musa) al Sadr who is the champion of national sovereignty for Iraq, says that is still occupation and occupation is the key word for why we should look out.”

Gregory also asked Paul on his opinion of the United States’s involvement in Libya. “If you look at what happened in Libya,” questioned Gregory. “Do you believe that the United States has a moral responsibility to deal with humanitarian crisis anywhere in the world?”

In addition, the libertarian firebrand called President Obama’s use of drones for military targets “illegal under international law.”

“There’s no authority in our constitution that we can just willy-nilly drop bombs on anybody that we want,” Paul explained. “We kill innocent people this way. Why do you think people hate us? Because, there’s so much collateral damage. You see, oh, this is a bad guy, we’ll drop a bomb on him and kill him. We might hit him. We might miss him. We might hit another car and then you kill ten other people. What would we do if they did that to us, David? We would be a little upset if China did that to us, wouldn’t we?”

Watch Paul’s appearance on Meet The Press below via NBC: