Ron Paul ‘Worried’ U.S. Might Kill Snowden With Drone: ‘I Don’t Think For A Minute He’s A Traitor’
VIDEO

Ron Paul ‘Worried’ U.S. Might Kill Snowden With Drone: ‘I Don’t Think For A Minute He’s A Traitor’ 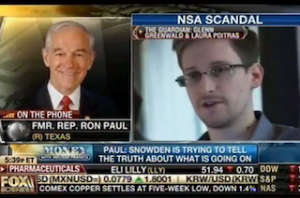 Towards the end of an outspoken 24 hours of media appearances, former Rep. Ron Paul (R-TX) appeared via phone on Fox Business Network with Melissa Francis and made a bold prediction about NSA leaker Edward Snowden‘s future. “I’m worried about somebody in our government who might kill him, with a cruise missile or a drone missile.”

Paul said he “absolutely” feels confident that Snowden has no intention of selling more U.S. secrets to a foreign government as some have feared. “I don’t think for a minute that he is a traitor,” Paul said. “Everybody is worried about him and what they’re going to do and how they will convict him of treason and how they’re going to kill him, but what about the people who destroy our Constitution? What kind of penalty are those individuals who take the Second or the Fourth amendment and destroy it? What do we think about people who assassinate American citizens without trials and assume that’s the law of the land? That’s where our problem is.”

When presented with the recent polling figures that show 56% of Americans support the NSA’s surveillance practices, Paul suggested those sentiments can be attributed to “propaganda” along the lines of “if you’re not for NSA spying on people, then you’re un-American, you’re unpatriotic, you hate America.”

Finally, Paul weighed on his son Senator Rand Paul‘s vow to challenge the NSA programs in the Supreme Court. While he said he supports “anything like that to call attention to it,” he added, “I’ve not been overly confident about the court system. I emphasize the fact that the most important thing is that the American people wake up and understand what liberty is all about, what the Constitution is about. and if they don’t understand that, nothing will change it.”