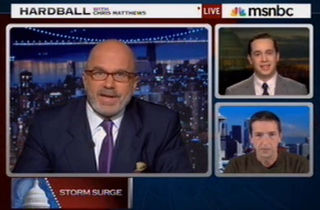 This afternoon on MSNBC’s Hardball, liberal commentator Ron Reagan and Club For Growth spokesman Barney Keller got into a heated battle over the conservative opposition to pork spending inserted into the Sandy relief bill that passed through Congress earlier today.

“What happens every time the government has a disaster relief bill, what they do is come up with a big spending bill,” Keller lamented to start the segment. “There’s no accountability or oversight and it’s loaded with pork […] Every time we get into a disaster, we do the exact same thing. we keep kicking the can down the road and asking our children to pay for it.”

Fill-in host Michael Smerconish listed several examples of pork spending found by conservative legislators and stripped from the House version of the bill: “$2 million to repair damage to the roofs of museums in Washington, D.C., while many in Hurricane Sandy’s path still have no roof over their heads. $150 million for fisheries as far away from the storm’s path as Alaska. $15 million for NASA facilities though NASA itself has called damage from the hurricane minimal.”

Reagan then went on the attack: “If you want to have a discussion about flood insurance in this country or what FEMA does or how it does it or how effectively it does it, that’s fine. But you don’t do it when you have thousands of people in desperate need. You don’t hold those people hostage in a sense to your ideological predispositions. That is an ugly, thuggish way to do business.”

After explaining that the bill was broken up into three parts in order for Congress to fund “future disaster mitigation projects,” Keller responded, “We can’t keep adding money to the debt that we don’t have. We can’t keep borrowing money from China to pay for it.”

“Is there something wrong with future disaster mitigation?” Reagan shot back. “I think that would probably be a pretty good idea.”

“Ron, I don’t understand how building levees five years down the future in New York helps a person who is looking for disaster relief right now homeless on the street,” responded Keller.

Smerconish then grilled Keller over whether he supported the relief bill after Hurricane Katrina devastated much of the gulf region. “We opposed the Katrina relief bill. It wasn’t offset. They passed a huge spending bill with no accountability,” Keller said. “Afterwards we heard stories about FEMA trailers being untouched while people were starving in the street.”