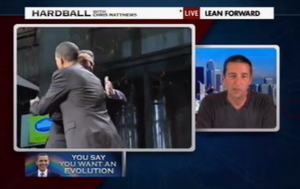 Chris Matthews‘ segment was about North Carolina, where a ban on same-sex marriage is up for vote. Matthews began by observing that pretty much everyone thinks Obama supports marriage equality, but that he’s unwilling to say it just yet.

“This whole evolving thing has really jumped the shark at this point,” Reagan said. “I mean, [Obama’s] taking more time evolving on this issue than humans took evolving from apes.” He acknowledged that’s a bit of “hyperbole,” but digressed.

We all know it’s a “political calculation,” he added: we could argue whether it’s a correct or incorrect one, but it’s an “obvious” calculation. Reagan continued: “He’s taking a civil rights issue and he’s trying to kind of, you know, straddle the fence on it, and it’s unseemly. He’s beginning to look ridiculous on this issue. He needs to just get off the fence and just go wherever they know he really is in the first place.”

Matthews asked, “If he loses the election because of this, and Mitt Romney walks into the White House, a man who says he will not evolve — doesn’t evolve, RINO, doesn’t believe in evolution, period — […] is that good for the cause?”

Reagan replied, “It’s not good for the cause, although the cause will continue and will prevail just because of demographics if nothing else.” He further added: