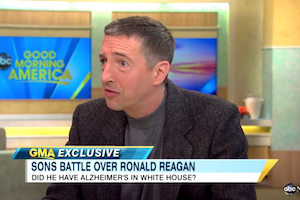 Ron Reagan got a lot of press for his new book about his father but, perhaps, not the press he intended. The media jumped on the claims made inside that his father may have been suffering from Alzheimers while in office and Ron’s own brother called him an “embarrassment” to the family. This morning, Reagan went on Good Morning America to clarify the book’s assertions as well as address the criticisms. During the interview, he did admit one factual inaccuracy in the book.

While some have seized upon that admission and ABC itself touts the interview with the headline “Ron Reagan Admits He Got Facts Wrong,” Reagan did not actually go back on his Alzheimers claim or the book’s story of his father receiving brain surgery (although he seemed reluctant to call it such). Reagan did, however, admit that the procedure took place in Tucson rather than San Diego as the book states.

As for his brother’s accusations, Reagan said he would not get into “inter-familial squabbles,” but did offer this:

“I hadn’t really thought about what Mike might say [before the book’s publishing]. That bit about ’embarrassment to your mother,’ that’s a little strange. I just spoke to my mother last night and she didn’t mention embarrassment. … She was worried about me, she said, ‘Are you alright?’ ‘Yeah, I’m fine.’ But I said, ‘They’re gonna ask me what you thought of the book so what should I say to them.’ And she said, ‘You tell them that I’ve read it. I loved it. It made me cry and I’m very proud of you.'”

Check out the interview from Good Morning America below: